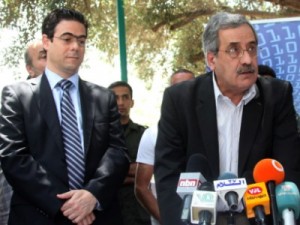 Nahhas said on Monday that Youssef’s days in the Lebanese state are numbered.

Even though Nahhas is no longer in the ministry of Telecommunications he was allowed to launch a free internet service at the Sioufi park in Beirut, while the new minister Nicolas Sahnawi was standing by his side .

“He tried to obstruct the functioning of the Telecommunications Ministry, but we succeeded in providing this service in Sioufi park.” Nahhas said

Nahhas added : “Youssef did not hesitate to obstruct the ministry and his days in state are numbered, unless he spends them in jail.”

OGERO’s role includes the operations, maintenance, sales, marketing, billing and management of the Ministry of Telecommunication fixed network in Lebanon.

Upon his return from Paris , Dr.Youssef told reporters that he was willing to discuss everything before the judiciary.

“I trust the Lebanese judiciary and am willing to discuss everything before them,” he said. “The equipment for the third mobile network belongs to Ogero,” he also said, adding that installing the equipment in the Telecommunications building was not illegal.

Reports have revealed that the reason behind Nahhas’ attempt to take over Ogero’s telecom network that was on the second floor of the Telecommunications Ministry was because of Syria.

There were rumors that the network which was donated to Lebanon by the Chinese was being used by the opposition in Syria, but according to experts the network has never been put into operation. The experts also believe that even if the equipment was operational it could not be of help to the Syrian opposition in any way.

Dr. Ziad Ajouz leader of the Free Nasserite Movement described Nahhas’ plan to dismantle the Ogero telecom station as a militia action. Ajouz said Nahhas was accompanied by Hezbollah gunmen to dismantle the OGERO station that is being always guarded by the internal security forces. Ajouz said that Nahhas got the password from Hezbollah chief Sayyed Hassan Nasrallah