Ogero’s chief is back and company responds to Aoun

Upon his arrival, Dr.Youssef told reporters that he was willing to discuss everything before the judiciary.

“I trust the Lebanese judiciary and am willing to discuss everything before them,” he said. “The equipment for the third mobile network belongs to Ogero,” he also said, adding that installing the equipment in the Telecommunications building was not illegal.

Ogero issued a statement on Wednesday responding to Change and Reform bloc leader MP Michel Aoun’s statement that the company was disobeying the orders of resigned Telecom Minister Charbel Nahhas.

“Nahhas has no right to order Ogero directly, the Lebanese cabinet does…and this has been the case since 1974,” the statement said.

It added that Nahhas should go through the cabinet to instruct the telecom company.

The statement also said that the company is always being monitored by the Court of Account, adding that it submits annual reports of expenditures as it also briefs relevant bodies of its activity –including the Telecom Ministry.

Ogero also denied Aoun’s remarks that Finance Minister Rayya al-Hassan wanted to transfer 100 billion L.L. to the company without having them monitored by the Telecom Ministry.

“The decision was taken by the Court of Account on [March] 28, 2011 and it ordered Ogero to use [that amount of money] that is taken out of the Telecom Ministry’s budget in order to cover the expenses of maintenance and salaries of employees.”

The statement also said that Nahhas refused to carry out the decision and “only 3.9 billion L.L. were paid out of the 100 billion L.L.”

On Tuesday, Aoun slammed Ogero and said that Hassan requested Lebanon’s Central Bank Governor Riad Salameh not to agree to transfer the Ogero employees’ salaries which Nahhas had already transferred. 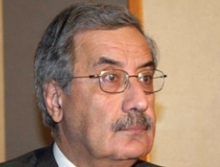 Reports have revealed that the reason behind Nahhas’ attempt to take over Ogero’s telecom network that was on the second floor of the Telecommunications Ministry was because of Syria.

There were rumors that the network which was donated to Lebanon by the Chinese was being used by the opposition in Syria, but according to experts the network has not yet been put into operation. The experts also believe that even if the equipment was operational it could not be of help to the Syrian opposition in any way.

ISF Chief Ashraf Riffi did not allow Nahhas, who was reportedly accompanied by Hezbollah gunmen , to take over the Ogero network.

Former Minister for Communications and MP Marwan Hamadeh who attended the parliamentary telecommunications committee meeting on Monday ( to discuss the incident) said in an interview with al Hayat newspaper that the intervention by Nahhas was unconstitutional and against the and laws of the land.

Hamaded explained that “the request of Nahas to dismantle the equipment donated by the Chinese company” Huawei “, and taking it away from Ogero to be handed over to “MTC” or “Mick” company , contradicted several laws, the most important of which is law 431 for communications, which authorizes “Ogero” to set up a Lebanese telecom network as a third cellular network using the Chinese donated equipment and this was authorized by the outgoing cabinet under decree number 146 / 2007.

National Liberal Party leader Dori Chamoun said on Tuesday that Nahhas is not “a normal person.”

“Nahhas is not a normal person, he was our neighbor and wasn’t normal,” he told Future News television.

OGERO’s role includes the operations, maintenance, sales, marketing, billing and management of the Ministry of Telecommunication fixed network in Lebanon.