Iran sees threat to its clout amid Arab Spring 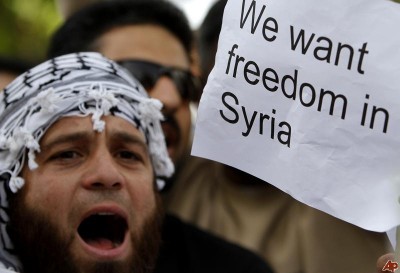 As Arab uprisings sweep the Middle East, few images will likely unsettle Iran’s leadership more than that of their flag being burned by Syrian protesters angry with the Islamic Republic’s deep ties with Syria’s dynastic regime.

Activists shouted “freedom” as they torched the flag in a protest broadcast online. It was just one of the many demonstrations against Bashar al-Assad’s government that have shaken Syria for months and led to at least 1,000 deaths.

Of all the regional revolts, Syria’s presents the biggest dilemma for Iran. Syria is the linchpin that connects Iran to the powerful Shiite Hezbollah militia in Lebanon. Syria, Iran, and Hezbollah, along with Palestinian militant group Hamas, form the so-called “Axis of Resistance” against Israel and Western aims throughout the Middle East. But if Mr. Assad is forced from power, that axis – and Iran’s “soft power” reach in the region – could be in jeopardy.

“If the Syrian regime [falls], that will be a major blow to Iran’s foreign policy, in terms of ideological aspirations, projecting its power in the eastern Mediterranean, [and] trying to participate – whether substantially or symbolically – in the Arab-Israeli conflict,” says Jubin Goodarzi, a Mideast specialist at Webster University in Geneva, Switzerland.

Iran has portrayed the Arab Spring as an “explosion of sacred anger” and an “Islamic awakening” since it brought down pro-Western dictators in Tunisia and Egypt. But the unrest is a double-edged sword for Iran: Two years ago it put down its own pro-democracy Green Movement and now seems unable to sell its message to a region swept up in change that has little to do with religion or anti-Western hatred and much to do with freedom. And for Arab revolutionaries, that brutal 2009 crackdown further diminishes Iran’s legitimacy in the new Middle East.

Iran’s relationship with Syria has been one of the most enduring – and unlikely – in the modern Middle East. In the early 1980s, Syria, ruled by the secular Arab nationalist Baath Party, sought to forge an alliance with the Islamic rulers of Iran to bolster its stand against Israel in the wake of the 1979 Israeli-Egyptian peace treaty.

Syria was the first Arab nation to recognize the Islamic Republic. And it was the only one that stood alongside Iran throughout the Iran-Iraq War in the 1980s. After the US invasion of Iraq in 2003, Iran became a key supporter of Shiite militants in Iraq and railed against the American-led war effort, winning it praise throughout the Middle East. It won more regional acclaim in 2006 for supporting Hezbollah during its 33-day war with Israel.

Back then, Iran’s combative president, Mahmoud Ahmadinejad, regularly ranked as the second most popular leader in the Arab world after Hezbollah chief Sheikh Sayyed Hassan Nasrallah in polls. As Iran made progress on its nuclear program, Mr. Ahmadinejad declared Iran a “real” superpower.

But as change has swept through the Middle East, Ahmadinejad’s star has fallen. Anti-Iran and anti-Hezbollah chants echo across Syria, and the reach of Iran’s soft power is limited. Arab nations remain suspicious of Persian Iran and its regional and nuclear ambitions. More broadly, a March BBC global public opinion poll of more than 28,600 people in 27 countries found Iran to be the least favorably viewed nation – its negative rating of 59 percent is higher even than North Korea’s.

“The Syrian populace, the majority see Iran as part and parcel of the problem,” says Mr. Goodarzi, author of “Syria and Iran: Diplomatic Alliance and Power Politics in the Middle East.” “So Iran is worried that if the regime does collapse, the new regime at the very least will be very cool – or outright hostile – to Iran.” 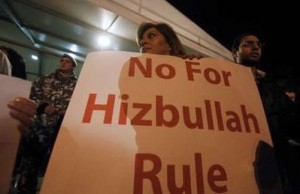 The same could hold true for Hezbollah, which has played down risks to the Assad regime. In one of Hezbollah’s most explicit comments on the Syria crisis, Sheikh Nasrallah urged Syrians on May 25 to support Assad’s “regime of resistance.”

“The difference between the Arab uprisings and Syria … is that President Assad is convinced that reforms are necessary, unlike Bahrain and other countries,” Nasrallah said.

Hezbollah’s rank and file express confidence, too. “The Syrian regime will not fall, and even if it did we have plans to deal with the situation,” says Abu Jihad, a Hezbollah unit commander from southern Beirut.

Syrian witnesses allege that both Hezbollah and Iranian personnel are in the streets helping with the government crackdown. And analysts say there is unease within Hezbollah, even if its members still believe Assad can prevail.

“The trend in the protest movement is not on Assad’s side and Hezbollah must be realizing that,” says Randa Slim, a US-based political analyst who is writing a book on Hezbollah. “The protest movement [in Syria] is steadily broadening its geographic base…. Whoever is leading this movement is learning quickly from their successes and failures and is adapting accordingly.”

Iran’s alleged assistance to Syria consists of technical know-how to trace and block social-networking tools used by opposition activists to mobilize and disseminate information to the outside world.

“Having weathered a social-networking revolution of its own, the Iranians have developed techniques and insights into combating Facebook-assisted uprisings,” says Joshua Landis, director of Middle East studies at the University of Oklahoma and author of the influential Syria Comment blog. “The clearest sign of Iranian assistance is Syria’s development of cadres of pro-regime youth who can spread regime friendly voices on the Internet, [on] websites, and blogs.” Some Iranian newspapers have raised questions about Tehran’s “failure” to take advantage of the Arab Spring.

“The Iranian government does not seem stable anymore after the 2009 election,” says Mehdi Khalaji, an Iran expert at The Washington Institute, noting that questions abound about the 2013 presidential election and succession of Iran’s aging supreme leader, Ayatollah Ali Khamenei.

Ahmadinejad under fire at home

In recent weeks, Ahmadinejad has been bogged down in political infighting. The president – once hailed by Iran’s supreme leader as the “divine” choice of the people – is under such ferocious daily attack from fellow conservatives that he may not finish the remaining two years of his term.

“Iran has already lost a lot. Iran wanted to somehow confiscate the revolutionary discourse in the Arab world and it failed,” says Mr. Khalaji.

But officially, Iran brims with confidence. Current events “provide our revolution with the greatest opportunities,” the Revolutionary Guard Qods Force commander Qassem Suleimani told seminarians in late May. “Our boundaries have expanded and we must witness victory in Egypt, Iraq, Lebanon, and Syria. This is the fruit of the Islamic revolution.”