Assad’s speech may buy him time, but not survival 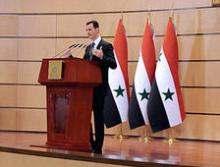 Beirut, Lebanon- Syrian President Bashar al-Assad offered promises of imminent elections and reforms today as as part of a “national dialogue” process that could lead to a new constitution and possibly end the dominance of the ruling Baath Party.

But while Mr. Assad acknowledged that Syria has experienced “difficult days” since his last speech two months ago, his framing of the crisis and his proposals for addressing it fell far short of opposition demands. Fresh protests immediately broke out in cities around the country.

“Today, after 98 days of protests, he is living in denial,” says Rami Nakhle, a Syrian working in Beirut with the Local Coordination Committees, a clearinghouse for Syrian opposition protests and activities. “It has become clear to everybody that Bashar al-Assad cannot change. He doesn’t realize that Syria has changed forever but he’s still the same president we heard last time, in April.”

Rather than directly addressing the opposition protest movement, Assad’s comments appeared intended mainly for the silent mass of Syrians who support the call for reforms and greater freedoms, but have chosen not to take to the streets out of fear that the collapse of the Assad regime could plunge the country into sectarian bloodshed.

Assad’s promises of change, and talk of parliamentary elections in August and a dialogue with the opposition may help buy the regime some extra time. However, the uprising has shown remarkable durability since it began three months ago, despite a ruthless crackdown by troops and security forces that has left an estimated 1,500 people dead and provoked increasing anger from the international community.

With the opposition showing no signs of scaling back and the international community growing ever more frustrated with the rising violence, analysts say that the Assad regime’s survival is increasingly doubtful.

“I don’t see how Bashar can get out of this in the long-term,” says Andrew Tabler, a Syria expert at the Washington Institute. “The genie has been let out of the bottle.”

Assad: Syria at a ‘turning point’

When the clamor for change swept through Tunisia earlier this year then Egypt, Bahrain, Libya, and Yemen, analysts and commentators were united in predicting that Syria would be the one country to evade the consequences of the Arab Spring. Ruled by the Assad dynasty since 1970, the Syrian regime has a long history of ruthlessly stamping out any dissent and maintains order through a pervasive network of intelligence agencies.

But all it took was the detention in early March of a handful of youths for daubing anti-regime graffiti on a wall in the southern city of Deraa to provide the spark for a revolt that has since spread across most of the country.

The protest movement initially limited its demands to reforms rather than regime change. But when the regime dithered over the reforms and then the security forces began using live ammunition against unarmed street marchers, the demands and the resolve of the protesters hardened.

At first, it appeared that sheer brute force could snuff out the embers of revolt, but the protesters have continued to take to the streets seemingly undaunted, even as the casualty toll mounts. Although the opposition has yet to win over the cities of Damascus and Aleppo, where half the country’s population lives, the security forces have proven unable to crush the uprising.

Today, in his first public comments in two months, Assad said that Syria was at a “turning point” and sought to persuade his listeners to patiently await promised reforms rather than siding with a small group of “saboteurs.”

However, Assad added that there could be “no development without stability, no reform in the face of sabotage and chaos.”

“We make a distinction between those [with legitimate grievances] and the saboteurs who represent a small group which has tried to exploit the goodwill of the Syrian people for its own ends,” he said.

Following the speech, protests broke out across the country. Mr. Nakhle said that eight separate demonstrations were under way in Homs. Other protests were reported in Latakia on the Mediterranean coast, the northern city of Aleppo, the province of Idlib, scene of a crackdown in the past two weeks by security forces, and some suburbs of Damascus.

On March 30, in a speech to the Syrian parliament that was peppered with chuckles and enthusiastic applause from the audience, he blamed two weeks of violence on “foreign conspiracies” and failed to make any mention of reforms that even regime spokespeople had earlier assured he would unveil.

After receiving heavy criticism for his initial speech, a more somber president announced on April 16 the lifting of the state of emergency law that grants the regime sweeping security powers.

But by then, the protest movement had spread across the country and the demands of the opposition had escalated.

Many analysts believe that it is too late for Assad – whose credibility as a would-be reformer is fast dwindling – to usher in a reform program to satisfy the opposition, and doubt that the regime has the will to do so anyway.

“The regime will fight it out, and the opposition will keep protesting,” says Mr. Tabler. “The opposition knows if it stops they will have no leverage against the regime.”

The international community has been slow to react to the violence in Syria beyond issuing statements demanding immediate reforms from Assad.

With NATO engaged in prolonged Libya campaign to protect civilians from Qaddafi’s regime, there is little appetite to embark upon another military commitment in the Middle East. Given Syria’s geographic location and the regime’s network of alliances and relationships with states and militant groups, turmoil in Syria, unlike Libya, Yemen, Tunisia and even Egypt, could greatly destabilize the broader Middle East.

The United Nations Security Council has failed so far to even agree on a sternly worded resolution condemning Syria’s suppression of the uprising, largely due to the opposition of Russia and China. Both countries have strong commercial – and in Russia’s case military – ties to Syria that could be jeopardized if the regime collapses.

Russia operates a naval base at Tartus on Syria’s Mediterranean coast that is currently being modernized and expanded to turn it into Moscow’s main naval base in the Mediterranean capable of serving guided missile destroyers and even aircraft carriers. The first stage of the development project is supposed to completed next year.

In frustration at the opposition mounted by Russia and China at the UN, European Union foreign ministers in Luxembourg on Monday agreed on a draft resolution to expand sanctions against Syria. The EU is looking to add companies and individuals to a list of 23 people subject to an assets freeze and travel ban.