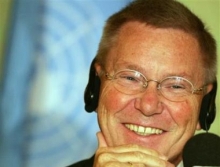 Berlin Chief Public Prosecutor and former UN chief investigator Detlev Mehlis said during an interview with the German radio Deutsche Welle on Thursday that Syrian president Bashar al Assad ordered the assassination of former Lebanese PM Rafik Hariri after suspecting that he was behind a coup to topple the Syrian regime and disarm Hezbollah in cooperation with France and U.S.”

“The mastermind of Hariri’s killer is sitting in Damascus” , Mehlis said in the interview

He said ” we came to the conclusion that members of the Syrian regime were involved in the assassination and witness testimonies confirmed that the way the regime in Syria is structured doesn’t allow anyone to carry out such crimes without orders from Assad.”

The interviewer commented that the image of President Assad was always depicted as someone who was trained in London as an ophthalmologist and asked is the right image for him ?

Mehlis said ” No, not in any way. He said this is a wishful thinking image by some who were trying to maintain contact with the regime but talking to former vice president Abdel Halim Kaddam ( by the way he was VP for 20 years and was the best witness) gave us an insight into the system and the role Assad played . The talk that Assad was being pressured by dark forces is nonsense . He is clearly a part of this evil system.

Asked how loyal are military and intelligence behind the Assad family?

Mehlis said : This is “coffee grounds ” and added : “As in all dictatorships as soon as they feel that the regime is about to fall they would overthrow it .”

Asked what role did money play in the contract killing of Hariri ?

Mehlis said we have of course investigated this issue , but the real motive in our opinion was Syria’s suspicion that Hariri in cooperation with with the Americans and the French was plotting to bring the Syrian regime down, and this according to Syria’s law is treason which is punishable by death.

Asked about the future of the Syrian regime he said this all depends on how strong the opposition is and whether it will be able to topple the regime specially since it does not have any foreign support Mehlis said the problem is that are some who still believe that there can be no peace in the Middle east without Syria and quoted what he branded as “stupid quote ” from Henry Kissinger who said : “Without Syria there is no solution to the Middle East problem.” Mehlis said :”This is of course nonsense Syria has always been part of the Middle East problem.”

The Special Tribunal for Lebanon (STL) an international tribunal was created for the prosecution of those responsible for Hariri’s assassination . Hariri was assassinated on on February 14, 2005. The tribunal also has jurisdiction over a series of other attacks in Lebanon (between 1 October 2004 and 12 December 2005) if they are proven to be connected with the Hariri assassination. The court is based in Leidschendam, near The Hague, in the Netherlands and it has a field office in the Lebanese capital Beirut.

According to local reports STL will announce the indictments between June 20th and July 5th.