One party official and 1 soldier killed in Tripoli clashes , update 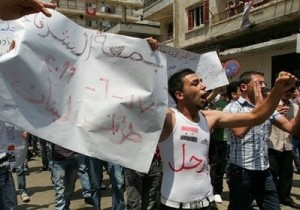 The gunfight started at Syria Street, which divides the two neighborhoods, after a demonstration in support of the Syrian people, which was launched soon after Friday Muslim prayers.

New TV reported that one member of the Lebanese army Mahmoud Abdul Hamid was also killed and another was injured in the gunfight, as well as 7 civilians.

Tensions remained high in the area despite the army’s heavy deployment.

Future News meanwhile reported that a percussion bomb was hurled at the demonstration at Bab al-Tabbaneh.

Some 600 Lebanese and Syrians too part in the demonstration in support of the Syrian people, according to local reports

Update ; The death toll has risen to 3 and the number of injured is at least nine according to New TV . The stattion did not identify the third victim

Photo: Syrian and Lebanese anti-Syrian government demonstrators rally in the northern Lebanese coastal city of Tripoli on June 17, 2011. Two people were killed and at least seven others were injured on Friday in clashes between Sunnis and Alawites following a protest against Syria’s regime in the city of Tripoli, a security official said.