19 killed in Syria as protests surge in defiance of crackdown 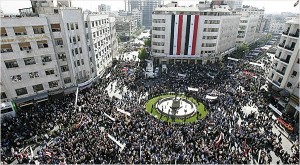 Tens of thousands of protesters poured into the streets of Damascus’s suburbs and three of Syria’s five largest cities on Friday, in a weekly show of defiance against President Bashar al-Assad. Activists said at least 19 people were killed.

Security forces fired on protesters in Homs, one of Syria most restive locales, and the police and protesters fought in Deir al-Zour, a large city in the east. But thousands were permitted to demonstrate in Kiswa, a town south of Damascus and carry banners that read, “Leave!” and “The people want the fall of the regime.”

Some opposition figures had speculated that the government might try to bring down the weekly death toll, which surged past 100 on one Friday, in anticipation of a speech Mr. Assad is expected to give as early as Sunday. Syrian officials have portrayed the address as significant, though many in the opposition said their expectations were low.

As the day wore on, the toll approached the 22 who were killed last Friday.

“We want freedom and dignity but not under President Bashar,” said a 30-year-old farmer in Kiswa who gave his name as Abdel-Rahman. “He keeps promising for three months on reforms but all we see is more killing and suffering.”

The government’s crackdown has forced thousands of refugees across the northern border with Turkey and, on Friday, its repercussions spilled across the southern border with Lebanon, when a grenade exploded near hundreds of people protesting against Mr. Assad’s government in the city of Tripoli. Three people were killed there, including a soldier, the police said.

The clash erupted in a part of the northern Lebanese city that has often witnessed clashes between Sunni Muslims and Alawites, a minority heterodox sect that serves as the backbone of Mr. Assad’s rule.

The crackdown has brought international condemnation of the Syrian leadership, which has held power for more than four decades. Diplomats have spoken of growing pressure on Mr. Assad to take steps that have so far proven largely superficial, and Syrian officials have suggested that a more serious dialogue may ensue with opposition figures.

On Thursday, in a symbolic but humiliating episode, the country’s richest businessman, Rami Makhlouf, a cousin of Mr. Assad and reviled figure in the country, was forced to announce that he was quitting business and devoting himself to charity.

“You can’t do charity with the millions you stole from us,” read a banner Friday during a protest of hundreds in Zabadani, a town on the outskirts of Damascus.

Since the start of the uprising in mid-March, the government and opposition have cast it in a different light. At times, government officials have acknowledged some of the protesters’ demands as legitimate, while insisting that armed groups have hijacked the movement. The opposition says the government is exaggerating the threat posed by armed groups and contends that the demonstrations are overwhelmingly peaceful.

Syrian state television said a policeman was killed Friday and more than 20 wounded when armed groups opened fire on them. It said six police officers were also wounded when gunmen attacked a police station in Deir al-Zour. Nawaf al-Bashir, an opposition figure in the city, said security forces killed two civilians there and wounded nine people.

The government has barred most foreign journalists from reporting in Syria, and it was almost impossible to reconcile the typically contradictory accounts.

Activists said the worst violence on Friday occurred in Homs, Syria’s third-largest city and a center of the uprising, and the province of Idlib, a conservative Sunni Muslim region in the north that military forces have sought to return to the government’s control.