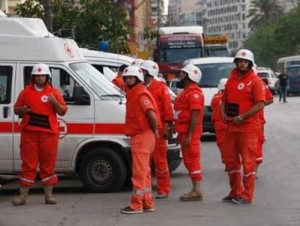 Armed clashes erupted earlier in the day in Tripoli following a rally in support of Syrian protesters. The security official of the Arab Democratic Party, Ali Fares was killed and 2 other , one soldier and one civilian .at least 10 others were reportedly injured.

Photo: Members of the Lebanese Red Cross gather as they wait on a road leading to the Sunni Muslim Bab al-Tabbaneh neighborhood, in Tripoli, northern Lebanon, June 17, 2011.