In Syria, signs of a civil war, caught on tape 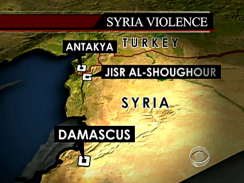 Video gradually surfacing online shows the defiance of anti-government demonstrators is escalating – along with the government’s resolve to crush them.

Yesterday in Al Gaboun – a suburb of Damascus – a video posted to YouTube shows that protestors were actually baiting Syrian security forces. At first, the troops seem to hold back, but not for long. The gunmen eventually got into position – some kneeling – and opened fire on the unarmed demonstrators.

CBS News correspondent Elizabeth Palmer reports that, where there’s no video of the crackdown – in Syria’s north – there is other evidence in the form of a tide of refugees fleeing to safe haven in Turkey.

Mustafa Daas told CBS News he was at a protest yesterday – just 20 miles across the border – in Jisr al-Shougour, where soldiers and police opened fire on protesters almost right away.

Mustafa, while shocked and trying to help the wounded, also tried to gather evidence on his cell phone. The soldiers, he says, were shooting from the ground and the air.

Mustafa also told CBS News that police and soldiers who refused to fire on the protestors were themselves shot. These are exactly the kinds of divisions inside the security services that other residents of the area described at another protest last week.

There’s more evidence of splits in the Syrian army with the growing number of deserting soldiers arriving in Turkey, describing atrocities.

Mohammed Mirwan Khalef says he and his friends escaped after they watched an officer – unprovoked – shoot a civilian in the head.

The accounts are impossible to verify, but if true they could be the first real signs of civil war.