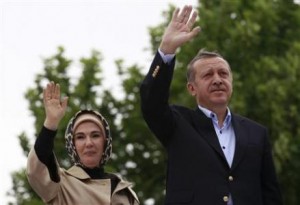 Turks vote in an election on Sunday that is expected to see Prime Minister Tayyip Erdogan win a third consecutive term in office and could give him a mandate to rewrite the constitution.

A Muslim democracy and aspirant to join the European Union, Turkey has become an economic powerhouse and an influential player on the global stage since Erdogan’s ruling AK Party first swept to power in 2002.

Polling stations in the country of 74 million people were due to open at 7.00 a.m. (12 a.m. ET Saturday) Sunday in the east, and an hour later in the west, including the capital Ankara and Istanbul.

Opinion polls have shown Erdogan set to win four more years of single party rule in the nation that straddles Europe, the Middle East and Asia.

His support has been built on his success in creating a booming economy and in ending decades of chaotic coalitions, military coups and failed international financial bailouts. 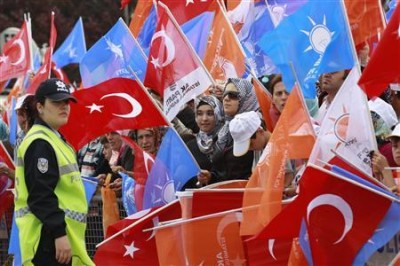 The only doubt hanging over Sunday’s vote was about the margin of victory. Erdogan needs more than a simple majority to be certain of pushing through plans for a new constitution to replace one written in 1982, two years after a military coup.

Erdogan, whose party evolved from banned Islamist movements, says the new charter will be based on democratic and pluralistic principles that will bring Turkey closer to EU standards.

While foreign investors have traditionally seen AK as the most market-friendly party, Erdogan’s critics say he has an authoritarian streak. They fear he will use his growing power to switch to a more presidential system of government, with an eye on becoming president himself in the years ahead.

Opponents also point to rampant use of wiretaps by state agencies, the detention of journalists critical of the government, nepotism and a widening gap between rich and poor.

AK, a socially conservative party, held 331 of the 550 seats in the last parliament, and polls show it scoring around the same or better.

At least 330 seats would give AK the power to call a referendum on rewriting the constitution. If it gets more than a two-thirds majority, it will be able to change the constitution without resorting to a plebiscite.

“These elections are not about who wins, but about whether AK will win a strong majority to rewrite the constitution,” Sinan Ulgen, from the Istanbul-based Center for Economics and Foreign Policy Studies, told Reuters.

The opposition has been in disarray since AK routed old establishment parties tainted by corruption and financial mismanagement in 2002.

Opinion polls put support for the CHP at between 25 and 30 percent.

Kilicdaroglu has dropped the CHP’s old scaremongering tactics of accusing AK of wanting to turn Turkey into an Iran-style Islamic state and has focused his campaign on human rights and inequality, while warning of Erdogan’s growing power.

The performance of independents fielded by the pro-Kurdish Peace and Democracy Party (BDP) and far-right Nationalist Movement Party (MHP) could prove key to AK’s margin of victory.

The outcome of Sunday’s vote will have repercussions outside Turkey, a NATO member and U.S. ally that has forged stronger ties with fellow Muslim neighbors.

Analysts have warned the new government will face sobering economic challenges. The current account deficit is ballooning, fiscal policy needs tightening to cool overheating and youth unemployment is high in a country where the average age is 28.

Photo: Tayyip Erdogan, Turkey’s prime minister and the leader of the Justice and Development Party (AKP), and his wife Emine Erdogan greet their supporters during an election rally in Istanbul June 11, 2011. Turkey will hold parliamentary elections on June 12