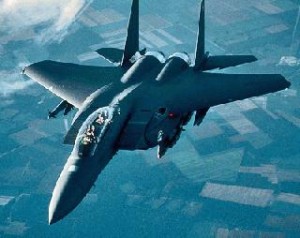 Two F-15 fighter jets intercepted a small civilian aircraft near the U.S. presidential retreat at Camp David, Maryland, today and escorted the plane out of the area, the North American Aerospace Defense Command said in a statement.

The F-15s intercepted the Beechcraft Bonanza, a single- engine aircraft, about 11 miles from Camp David, at about 3:25 p.m. New York time. The airplane, which was out of radio contact, landed without incident in Hagerstown, Maryland, Norad said.

Norad is a binational U.S. and Canadian command responsible for the air defense of North America.