Residents of the northern Syrian town of Jisr al-Shughur say they fear a military crackdown, a day after the government vowed retaliation for the alleged killings of 120 security personnel.

Locals said many residents were fleeing the area for the Turkish border about 20km away, ahead of the expected assault.

“People were struck by fear and panic after the government statements last night, it’s clear they are preparing for a major massacre,” a resident told the AP news agency, referring to Mohammed Ibrahim al-Shaar’s, the interior minister, warning that “the state will act firmly, with force”.

Syria’s Al-Watan newspaper said on Tuesday that a “security operation” would be launched in the town. 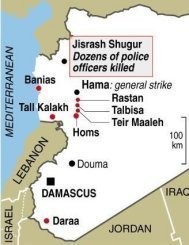 Security forces have been conducting military operations in Jisr al-Shughur for several days as part of a crackdown on anti-government protests. Activists say 42 people have been killed.

One of the activists said residents had seen troops approaching the town on Tuesday from Aleppo, Syria’s second city, and from Latakia on the coast.

State television reported that 120 members of the security forces were killed in an ambush on Monday by “armed gangs” who had “mutilated bodies and thrown others into the Assi river” and burnt public buildings.

Activists said the security forces were shot by government troops, after they refused to open fire on civilians.

A statement on Facebook – signed “residents of Jisr al-Shughur” – said “the deaths among soldiers and police were the consequence of defections in the army” and denied state media claims of armed gangs in their region.

Ammar Qurabi, head of the Egypt-based National Organisation for Human Rights in Syria, said it was unclear how such a large number of officers were killed.

He said the likely cause was army infighting, but added there may be cases of individual residents rising up against troops to defend themselves.

Turkish authorities said 35 Syrians wounded in the clashes were being treated at Turkish hospitals on Tuesday after crossing the border from Jisr al-Shughur.

The Turkish foreign ministry said 224 Syrians were sheltering at a camp near the border and that authorities were taking measures in case of an influx of refugees.

The Muslim Brotherhood in Syria, in a statement issued in London, said that opposition to Bashar al-Assad, the president, was peaceful, and accused authorities of looking for a pretext to justify more repression and killings.

“We assure international, Arab and national opinion that the Syrian revolution is both peaceful and countrywide,” Brotherhood spokesman Zuheir Salem said.

“Comments by the interior minister about the presence of armed groups terrorising the population of Jisr al-Shughur are a pretext to justify greater repression and murders of innocent citizens,” he said.

Jisr al-Shughur was a stronghold of the banned Muslim Brotherhood in the 1980s.

Seventy people were reported killed in the town in 1980 when it came under government shelling as Hafez al-Assad, the former president, cracked down on the group’s armed rebellion.

Foreign journalists are barred from traveling around Syria, making it difficult to report on the unrest and verify government and eyewitness accounts of the violence.

Activists say about 1,100 people have been killed in Syria since anti-government protests began in March.

Alain Juppe, the French foreign minister, said on Tuesday that it was “a question of days, maybe hours” before the UN Security Council voted on a resolution condemning Syria.

Juppe said the president had lost his legitimacy to rule.

William Hague, the British foreign minister, said Assad must “reform or step aside”.