Syrian ambassador to France says she was impersonated 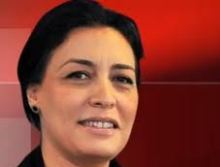 Syria’s ambassador to France said Wednesday that someone impersonated her and announced her resignation on French TV amid increasing uncertainty about her country’s future.

The apparently false resignation raised questions about how a respected French news channel, France 24, might have fallen for a hoax. France 24 said Wednesday that it is investigating that possibility.

It also underscored the complexity of the message coming out of Syria, where the government keeps tight control on information and foreign reporters have been expelled.

France 24 aired a telephone interview Tuesday with a woman who said she was Ambassador Lamia Shakkour. Asked about violence in Syria, the woman abruptly she said was resigning as ambassador, to the surprise of the questioner.

Shakkour later spoke by telephone to Syrian state television and denied having quit.

She appeared on camera for the first time on France’s BFM television early Wednesday and said, “I am completely surprised.” She accused France 24 of “impersonating the Syrian ambassador” and said she would sue France 24.

Speaking in front of a photo of Syrian President Bashar Assad – at her insistence – Shakkour said she will stay ambassador as long as Assad wants her to.

Philippe DiNacera, deputy editor at France 24, said Wednesday that the channel had called an embassy number to ask the ambassador to participate in a debate show.

He said they used a number they have used before, and were told by a man who said he was a political counselor to send an email with the request. The man responded, sent a photo of the ambassador and a cell number to use for a telephone interview at the given hour.

“We had no reason to question the identity of the person we were calling or to authenticate her declarations,” DiNacera said. “All the classic, professional procedures of inviting interviewees were respected.”

He said the channel is studying the “hypothesis” of a hoax. “If it is the case that France 24 was the object of a manipulation, then we will obviously pursue those responsible in court,” he said.

Syria has been beset by 11 weeks of growing protests and a violent crackdown by government forces. President Assad’s government has maintained a unified front until now, with only two members of parliament resigning since the start of the uprising in mid-March, one of whom later withdrew his resignation. Many people fear retribution if they talk to reporters.