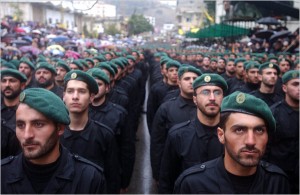 Despite the fact that all the key Lebanese leaders that met with US Assistant Secretary of State for Near Eastern Affairs Jeffrey Feltman during their meeting in Beirut confirmed that he did not discuss with them the cabinet formation, Hezbollah MPs are claiming the opposite .

Hezbollah MPs told Asharq al-Awsat newspaper in remarks published Sunday that Feltman carried a message to Suleiman and Mikati that the government “should not see the light.”

The MPs reportedly told the daily that Feltman stressed to the Lebanese leaders that the policy statement should clearly refer to Lebanon’s commitment to the rulings of the Special Tribunal for Lebanon.

The Mps reportedly accused Suleiman of going along with the U.S. proposals out of his keenness to reconnect with the March 14 alliance in an attempt to include them it in the new national unity cabinet.

The MPs accused Washington of using Lebanon as a bargaining chip against Syria which they said is now busy with its own problems. The MPs stressed that the deadlock will continue as long as Syria is in its current situation.

Hezbollah MP Mohamad Raad said Sunday during his visit to south Lebanon that what happened in the southern border town of Maroun al-Ras is what made Feltman rush towards Lebanon to seek measures that preserve Israel’s security, because the Americans have sensed real threat coming from the Palestinian people’s rising enthusiasm.

Another Hezbollah MP Hassan Fadlallah said during a speech in south Lebanon on Sunday that Feltman’s visit to Lebanon was a continuation of the provocation against Syria. He accused the US of seeking to shove Lebanon into Syria’s internal problems.

President Michel Suleiman’s sources told al-Mustaqbal daily on Saturday that the U.S. official did not discuss the government formation process or any other internal Lebanese affair with the president.

The sources said Feltman expressed his concern over the Syrian refugees in Lebanon and called on the Lebanese government to work with the U.N. High Commissioner for Refugees and other international organizations, including the International Committee of the Red Cross to fulfill its obligations under international law to provide protection to Syrian citizens fleeing the violence in Syria.

Similarly PM Designate Nagib Mikati’s sources told the daily An Nahar in remarks published on Saturday that Feltman in his meeting focused on explaining the American policy in the region and its interest in the changes and reforms, especially those taking place in Syria.

Similarly former Lebanese Finance minister Mohammad Chatah who is the current political adviser to caretaker Prime Minister Saad Hariri denied on Saturday discussing the formation of a new Lebanese cabinet with Feltman during their meeting in Beirut .

Lebanon has been run by a caretaker government since last January. Mikati was appointed in January as the PM designate with the backing of the Hezbollah led-March 8 alliance, MPs Walid Jumblatt and Mohammad Safadi . March 14 leaders have repeatedly said that intimidation from Hezbollah’s weapons helped secure the parliamentary majority for Mikati’s nomination.

So far Mikati has not been able to form a government. New obstacles came up after an agreement was reached on naming retired Brigadier Marwan Charbel as the Interior Ministry …. MP Michel Aoun is strongly against allocating any share in the cabinet to president Suleiman . Aoun is also insisting on naming all the Christian Maronite ministers, An Nahar sources reported.

Many analysts are of the Opinion that Hezbollah does not want a government in Lebanon out of concern that the country could face a similar situation to Gaza after Hamas took over the strip.