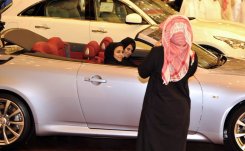 Authorities detained a Saudi woman on Saturday after she launched a campaign against the driving ban for women in the ultraconservative kingdom and posted a video of herself behind the wheel on Facebook and YouTube to encourage others to copy her.

Manal al-Sherif and a group of other women started a Facebook page called “Teach me how to drive so I can protect myself,” which urges authorities to lift the driving ban. She went on a test drive in the eastern city of Khobar and later posted a video of the experience.

“This is a volunteer campaign to help the girls of this country” learn to drive, al-Sherif says in the video. “At least for times of emergency, God forbid. What if whoever is driving them gets a heart attack?”

Human rights activist Walid Abou el-Kheir said al-Sherif was detained by the country’s religious police, who are charged with ensuring the kingdom’s rigid interpretation of Islamic teachings are observed.

Saudi Arabia is the only country in the world to ban women – both Saudi and foreign – from driving. The prohibition forces families to hire live-in drivers, and those who cannot afford the $300 to $400 a month for a driver must rely on male relatives to drive them to work, school, shopping or the doctor.

Women are also barred from voting, except for chamber of commerce elections in two cities in recent years, and no woman can sit on the kingdom’s Cabinet. Women also cannot travel without permission from a male guardian and shouldn’t mingle with males who are not their husbands or brothers.

The campaigners have focused on the importance of women driving in times of emergencies and in the case of low-income families. Al-Sherif said unlike the traditional argument in Saudi Arabia that driving exposes women to sinful temptations by allowing them to mingle with policemen and mechanics, women who drive can avoid sexual harassment from their drivers and protect their “dignity.”

Through Facebook, the campaigners are calling for a mass drive on June 17 and more than 12,000 people viewing the page have indicated they support the call. To encourage women to get behind the wheel, al-Sherif went for a drive on Friday as another activist filmed her.

Dressed in a headscarf and the all-encompassing black abaya all women must wear in public, al-Sharif said not all Saudi women are “queens” who can afford to hire a driver. She extolled the virtues of driving for women, saying it can save lives, and time, as well as a woman’s dignity. Al-Sharif said she learned how to drive at the age of 30 in New Hampshire.

“We are humiliated sometimes because we can’t find a taxi to take us to work,” she said.

On their Facebook page, the group says women joining the campaign should not challenge authorities if they were stopped and questioned, and should abide by the country’s strict dress code.

“We want to live as complete citizens, without the humiliation that we are subjected to every day because we are tied to a driver,” the Facebook message reads. “We are not here to break the law or demonstrate or challenge the authorities, we are here to claim one of our simplest rights.”