Obama: Bin Laden was no martyr 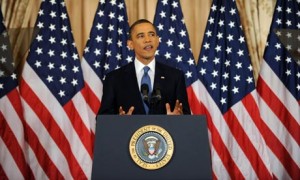 “Even before his death, al-Qaida was losing its struggle for relevence … by the time we found Bin Laden the majority of people in the Middle East had come to see it as an irrelevance.”

Obama then payed tribute to Mohamed Bouazizi, the street vendor who set himself on fire and helped launch the uprisings in Tunisia – and compared Bouazizi and his compatriots to the American revolutionaries of 1776.

Obama then moves on to the wider geo-political consequences of the uprisings and their consequences: “The question for us is what role the US will play as this decade unfolds.”

But “the narrow pursuits of these interests” for the US doesn’t help development in the region and fuels mistrust that Americans are only interested in its own goals, Obama warns.

The US must be prepared to respect the hopes of the street vendor – another reference to Bouazizi – as much as the region’s rulers, Obama says.

Obama then talks about the governments of Libya, Syria and Iran and their repressive regimes.

Obama said the Syrian government “has chosen the path of murder and the mass arrests of its citizens.” He praised the Syrian people for their courage in standing up to repression in a bloody crackdown that has killed hundreds.

But if America is to be credible, we must acknowledge that our friends in the region have not all reacted to the demands for change consistent with the principles that I have outlined today. That is true in Yemen, where President Saleh needs to follow through on his commitment to transfer power. And that is true, today, in Bahrain.

Bahrain is a long-standing partner, and we are committed to its security. We recognize that Iran has tried to take advantage of the turmoil there, and that the Bahraini government has a legitimate interest in the rule of law. Nevertheless, we have insisted publically and privately that mass arrests and brute force are at odds with the universal rights of Bahrain’s citizens, and will not make legitimate calls for reform go away.

Real reform will not come at the ballot box alone. Through our efforts we must support those basic rights to speak your mind and access information. We will support open access to the internet, and the right of journalists to be heard – whether it’s a big news organization or a lone blogger.

In the 21st century, information is power, the truth cannot be hidden, and the legitimacy of governments will ultimately depend on active and informed citizens.

Moving from politics and human rights to economics, Obama now sets out four points for action to help the Middle East’s economies and growth:

First, we have asked the World Bank and the International Monetary Fund to present a plan at next week’s G-8 summit for what needs to be done to stabilize and modernize the economies of Tunisia and Egypt. Together, we must help them recover from the disruption of their democratic upheaval, and support the governments that will be elected later this year. And we are urging other countries to help Egypt and Tunisia meet its near-term financial needs.

Second, we do not want a democratic Egypt to be saddled by the debts of its past. So we will relieve a democratic Egypt of up to $1bn in debt, and work with our Egyptian partners to invest these resources to foster growth and entrepreneurship. We will help Egypt regain access to markets by guaranteeing $1bn in borrowing that is needed to finance infrastructure and job creation. And we will help newly democratic governments recover assets that were stolen.

Third, we are working with Congress to create Enterprise Funds to invest in Tunisia and Egypt. These will be modeled on funds that supported the transitions in Eastern Europe after the fall of the Berlin Wall. OPIC will soon launch a $2bn facility to support private investment across the region. And we will work with allies to refocus the European Bank for Reconstruction and Development so that it provides the same support for democratic transitions and economic modernization in the Middle East and North Africa as it has in Europe.

Fourth, the United States will launch a comprehensive Trade and Investment Partnership Initiative in the Middle East and North Africa. If you take out oil exports, this region of over 400 million people exports roughly the same amount as Switzerland. So we will work with the EU to facilitate more trade within the region, build on existing agreements to promote integration with U.S. and European markets, and open the door for those countries who adopt high standards of reform and trade liberalization to construct a regional trade arrangement. Just as EU membership served as an incentive for reform in Europe, so should the vision of a modern and prosperous economy create a powerful force for reform in the Middle East and North Africa.

Obama now turns to Israel and Palestine and the peace process – and the big news here is that Obama is committing the US to affirming the 1967 borders for Israel – not in itself a change but because of the growth of the Israeli settlements issue, this is a big deal:

But what America and the international community can do is state frankly what everyone knows: a lasting peace will involve two states for two peoples. Israel as a Jewish state and the homeland for the Jewish people, and the state of Palestine as the homeland for the Palestinian people; each state enjoying self-determination, mutual recognition, and peace.

So while the core issues of the conflict must be negotiated, the basis of those negotiations is clear: a viable Palestine, and a secure Israel. The United States believes that negotiations should result in two states, with permanent Palestinian borders with Israel, Jordan, and Egypt, and permanent Israeli borders with Palestine.

The borders of Israel and Palestine should be based on the 1967 lines with mutually agreed swaps, so that secure and recognized borders are established for both states. The Palestinian people must have the right to govern themselves, and reach their potential, in a sovereign and contiguous state.

Obama then set out the parameters of a possible Middle East peace deal:

These principles provide a foundation for negotiations. Palestinians should know the territorial outlines of their state; Israelis should know that their basic security concerns will be met. I know that these steps alone will not resolve this conflict.

Two wrenching and emotional issues remain: the future of Jerusalem, and the fate of Palestinian refugees. But moving forward now on the basis of territory and security provides a foundation to resolve those two issues in a way that is just and fair, and that respects the rights and aspirations of Israelis and Palestinians.

For all the challenges that lie ahead, we see many reasons to be hopeful. In Egypt, we see it in the efforts of young people who led protests. In Syria, we see it in the courage of those who brave bullets while chanting, ‘peaceful,’ ‘peaceful.’ In Benghazi, a city threatened with destruction, we see it in the courthouse square where people gather to celebrate the freedoms that they had never known. Across the region, those rights that we take for granted are being claimed with joy by those who are prying lose the grip of an iron fist.

Obama reaches his conclusion, with a nod to his domestic audience, the voters back home, by drawing a comparison between the events in the Middle East and the past political struggles in the US:

For the American people, the scenes of upheaval in the region may be unsettling, but the forces driving it are not unfamiliar. Our own nation was founded through a rebellion against an empire. Our people fought a painful civil war that extended freedom and dignity to those who were enslaved.

And I would not be standing here today unless past generations turned to the moral force of non-violence as a way to perfect our union – organizing, marching, and protesting peacefully together to make real those words that declared our nation: “We hold these truths to be self evident, that all men are created equal.”

Those words must guide our response to the change that is transforming the Middle East and North Africa – words which tell us that repression will fail, that tyrants will fall, and that every man and woman is endowed with certain inalienable rights.

It will not be easy. There is no straight line to progress, and hardship always accompanies a season of hope. But the United States of America was founded on the belief that people should govern themselves.

Now, we cannot hesitate to stand squarely on the side of those who are reaching for their rights, knowing that their success will bring about a world that is more peaceful, more stable, and more just.

This is a Breaking News