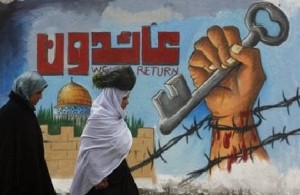 Israeli troops opened fire Sunday on more than 1,000 Palestinians marching on the northern Erez crossing with Israel, wounding at least 52 people, according to medics and an Agence-France Presse correspondent.

Witnesses said several hundred people had bypassed a Hamas checkpoint to come within a few hundred meters of a concrete border barrier, in a huge march to mark the 63rd anniversary of Israel’s creation in 1948, in what is known in Arabic as the “nakba” or “catastrophe.”

Meanwhile, Israeli troops on the Golan wounded at least 10 people as they fired live rounds and tear gas Sunday at protesters who broke though from the Syrian-held side of the plateau, medics and defense sources said.

Israeli media reported at least one dead and several wounded but there was no immediate confirmation of the toll, in one of the worst incidents for decades along a ceasefire line that has been quiet since a 1974 truce accord.

Medical officials said “between 10 and 20” of the protesters were wounded, with one feared dead, while three Israelis were said to have been slightly injured in the incident.

The incursion into the Israeli-held Golan Heights by thousands of protesters from Syria on Sunday was a “very serious and violent” incident, Israeli army spokeswoman Avital Liebowitz told AFP.

And in Lebanon, according to Reuters four protesters were killed and 11 wounded in a shooting incident at the Lebanese-Israeli border where Palestinians were demonstrating on Sunday, security sources said.

Further south, more than 5,000 demonstrators also held a mass rally in the southern Gaza city of Rafah, which lies on the border with Egypt, an AFP correspondent said.

They waved Palestinian flags and held up huge replica wooden keys to homes they fled or were expelled from during the 1948 Arab-Israeli war, which followed the creation of the Jewish state.

Palestinians marked the occasion this year “with great hope of bringing to an end the Zionist project in Palestine,” the Associated Press reported Prime Minister of the Hamas government in Gaza, Ismail Haniyeh, as saying to a crowd of 10,000 in Gaza.

“To achieve our goals in the liberation of our occupied land, we should have one leadership,” Mr. Haniyeh said, praising the recent unity deal between former rivals Hamas and Fatah.

Hamas and Fatah’s recent reconciliation and unity pact angered the Israeli government, which froze payment due to Palestinian Authority.

The freeze on the revenues Palestinians are owed from tax revenues has resulted in the Authority being unable to pay employees their May salaries. The Palestinian Authority has also pleaded to the international community for funds.

Mr. Abbas has been trying to market Hamas to the international community as an acceptable political partner.

More than 760,000 Palestinians—estimated today to number 4.7 million with their descendants—were pushed into exile or driven out of their homes in the conflict.

Around 160,000 Palestinians stayed behind and are now known as Arab Israelis. They number around 1.3 million people, or some 20 percent of Israel’s population.

It is this dispute that remains at the core of the Arab-Israeli conflict. Other issues include the return of territory that Israel seized during the 1967 Arab-Israeli war, and the status of Jerusalem, which Israel claims wholly.

Marches commemorating the “nakba” were also planned in the Abbas-ruled West Bank and Arab towns in Israel.

Israeli security forces were on high alert Sunday while the military sealed the West Bank for a day, barring Palestinians from entering Israel.

On Friday, police arrested 34 Palestinians on suspicion of public order violations, while 13 were rounded up preemptively as potential troublemakers.

A 16-year-old Palestinian, Mild Ayash, who was fatally wounded in “nakba” clashes in Jerusalem on Friday, died overnight, his family told AFP on Saturday.

“He died after being shot in the stomach; we are taking the body for burial now,” Maher Ayash, the uncle of the teenager, told AFP.

Another relative said that a Jewish settler in the flashpoint neighborhood of Silwan, where youngsters hurled stones and petrol bombs at police, shot the teenager.

Meanwhile, a UN official said that a planned visit to Silwan on Saturday by visiting Under Secretary-General for Humanitarian Affairs, Valerie Amos, was cancelled “because of the situation.”

In related news, one person was killed and several others injured as a truck driven by an Arab Israeli rammed into a bus and several cars in Tel Aviv, police said, amid reports that it was a deliberate attack.

Police were checking if it was an accident or a politically motivated attack as Palestinians commemorated the “nakba” anniversary.