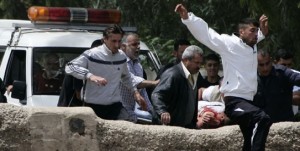 Three people were killed after Syrian troops and gunmen entered the town of Tel Kelakh on Saturday, a rights campaigner said, and hundreds fled what they said was fierce fighting into neighbouring Lebanon.

The violence came a day after activists said at least six people were killed during nationwide protests which erupted in defiance of a military crackdown aimed a crushing opposition to the autocratic rule of President Bashar al-Assad.

One of the three who died had been evacuated to Lebanon from the border town of Tel Kelakh, where fleeing residents reported seeing soldiers and black-clad gunmen loyal to Assad, and said they heard the sound of machine gun fire.

“There was a peaceful demonstration in Tel Kelakh yesterday but today there are clashes,” said one woman who fled the restive town for Lebanon, declining to give her name.

The United States and European Union have imposed targeted sanctions on Syrian officials and condemned Assad’s repression of the eight-week uprising, in which rights groups say about 700 people have been killed by security forces.

Authorities blame “armed terrorist groups” for most of the violence and say 120 soldiers and police have been killed.

Ammar Qurabi, head of the National Organisation for Human Rights in Syria, said the toll from Friday’s protests had risen to nine — four in the central city of Homs, three in towns around Damascus, and two in the southern city of Deraa.

But the bloodshed after Friday prayers was still less than in previous weeks. There were fewer clashes and the numbers of protesters were lower in areas where Assad dispatched troops and tanks to stamp out rallies.

Witnesses to at least two demonstrations on Friday said security forces backed off from confrontation, apparently heeding a reported order from Assad not to shoot protesters.

Assad has tried a mix of reforms and repression to stamp out the dissent, but with neither protesters nor government breaking the deadlock after two months of unrest, authorities announced on Friday plans for a “national dialogue”.

Calls To Free All Prisoners

Prominent activists said that dialogue would only be serious if the government freed thousands of political prisoners and allowed freedom of expression and assembly.

Aref Dalila, an economist who met Assad’s adviser Bouthaina Shaaban last week, said “the domination of the security apparatus over life in Syria” must end for different opinions to be represented.

A Syrian rights group said security forces have kept up a campaign of mass arrests despite the promised talks.

Scores were arrested on Friday in the Damascus suburb of Daraya, rural Damascus, Homs, the Kurdish region of Ifrin north of Aleppo and other regions, the Syrian Observatory for Human Rights said.

On Thursday writer Ammad Dayyoub and physician Jalal Nofal were charged with riot after they took part in a peaceful pro-democracy protest in central Damascus demanding the lifting of siege on Syrian cities, the Observatory said.

Assad’s Baath Party has run Syria with an iron fist since a 1963 coup, most of that time with his late father Hafez al-Assad as president. On his death in 2000, Bashar took power.

Rights groups have chided the United States and its European allies for a tepid response to the Syria violence, in contrast with Libya where they are carrying out a bombing campaign they say will not end until Muammar Gaddafi is driven from power.

French Foreign Minister Alain Juppe, in an interview with the pan-Arab al-Hayat newspaper, condemned Assad’s response to the protests, inspired by uprisings across the Arab world.

Asked whether he considered Assad still had legitimacy to rule Syria, Juppe replied: “A regime which fires on its own people loses legitimacy … Unless the regime changes its position, it should be punished”.

Photo : Syrians carry an injured man as they cross the border, in the Wadi Khaled area, about one kilometer from the Lebanon-Syria border, north Lebanon, on Saturday May 14, 2011. Hundreds of Syrians, including four wounded people, crossed into Lebanon on Saturday fleeing violence in their country as an uprising against President Bashar Assad’s regime entered its eighth week, Lebanese security officials said. – AP Photo