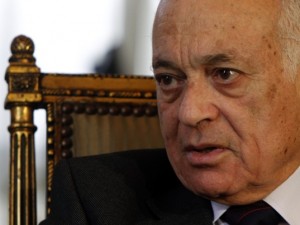 Palestinian factions Fatah and Hamas signed an agreement this past week in Cairo that was seen as a first step toward unifying rival governments in Gaza and the West Bank. U.S. and Israeli officials are wary that the reconciliation, brokered by Egypt, could undermine any peace efforts, since both countries consider Hamas a terrorist organization.

Prior to the ceremony, Washington Post senior associate editor Lally Weymouth interviewed Egyptian Foreign Minister Nabil Elaraby on the accord and other changes since the fall of President Hosni Mubarak. Excerpts follow.

You upgraded Egypt’s relationship with Hamas. [Former chief of intelligence] Omar Suleiman tried for years to negotiate a unity government between Fatah and Hamas, and you did it in months.

It all started with the new government that came after the revolution. The government — which is now two months old — made it very clear from the first day that we want to open a new page with all the countries in the world. As such, we contacted Hamas. We pressed that we would like to get unity between the Palestinian factions so that they would be ready to enter into negotiations with Israel. When Secretary [Hillary] Clinton was here, I told her we would like to see the resumption of — not the peace process, I don’t accept the word “peace process” — it is process and not peace. What we need is to obtain peace. . . . We want unity in the Palestinian house. It is in the interest of both groups, it is in the interest of Israel.

Don’t you think this deal makes any agreement with Israel impossible?

No. Who is going to negotiate with Israel? It is the PLO [Palestine Liberation Organization], not Hamas. They have accepted many things — that they will be a government of technocrats. Salam Fayyad might be the prime minister, there will be elections. Maybe the elections Hamas will lose, who knows. I don’t know why the U.S. government was lukewarm at first and then became hostile.

You want my answer? So was George Washington for the British. So was Nelson Mandela in South Africa. So were Menachem Begin and Yitzhak Shamir. Begin was one of the biggest terrorists and was responsible for the bombing of the King David Hotel. Shamir was responsible for the assassination of Count Bernadotte. And they worked for peace after that. Allow someone who is fighting for a cause to see the light of day at the end of the tunnel and to enter into peace. That is the history of the world.

The problem with Hamas is that they don’t accept Israel.

Let’s say you have a government — take any government, take Israel — there are leftists, rightists, Marxists, whatever they are. The main thing is that they [Hamas] accept there will be negotiations with Israel. We would like to see a recognition of the state of Palestine by the overwhelming majority of member states. We took the cue from what President Obama said last year, that he would like to see a state of Palestine by next September.

What are its borders?

[The ones set in] 1967, with the land swaps which have been agreed on since [Bill] Clinton’s Camp David Accords.

Moving to Iran, you recently said Egypt intends to ready to normalize relations with Iran.

No, never. I said Egypt has turned a page with every country in the world. I never specified Iran. [I was] asked if this included Iran, and I said yes. We don’t want to look backwards, we want to look forward. No decision has been made on Iran. Every country in the world has relations with Iran except three — [the United States], Egypt and Israel.

But the tone of your statement on Iran indicates more than that. No matter what you say, Egypt let Iranian ships go through the Suez Canal.

Are we at war with them? We are opening a new page with every country in the world. We cannot stop a ship from moving through the Suez Canal unless they are at war with us.

Didn’t they have a big Hezbollah cell aimed at Egypt a few years ago?

U.S.-Egyptian relations have been based on a shared strategic vision. So do you feel that Egypt’s vision will change?

I think they are going to be closer than ever.

Do you want that?

Yes, I have told Secretary Clinton and the various senators I have met that I want that.

I read that the majority of Egyptians want to abrogate the treaty with Israel. What kind of relations do you want to have with Israel?

Egypt is going to comply with every agreement and abide by every treaty it has entered into. That is the goal of treaties.

That goes for all the treaties? I know you worked on many of the agreements with Israel, starting with the disengagement in 1973.

Yes, every one. I did Camp David, of course. I always say it is difficult to negotiate with Israel, but once it is done and everything is signed, both sides abide and comply faithfully.

So if Egypt and Israel have normal relations, can Egyptians and Israelis go back and forth?

So you are opening the border? How will you alleviate that?

We will provide for the needs of the people of Gaza. This is very important for us. The United Nations, the E.U., they have asked us for that.

You have been having trouble in the Sinai with the Bedouins. Why can’t you control that?

It is controlled now.

Will you let Palestinians come here?

We have allowed them to come here. But if anyone is an undesirable, they will not be permitted entry. But we will provide Gaza with humanitarian needs.

We have received approval.

I never said that. I think the first 10 years of the Mubarak regime were very good. But the last period, with his son in power — since then I haven’t been in the government.

So you think that the last 10 years of the regime was a bad period?

The question of rotation is very important. People were shocked how long [Mubarak had been in power].

Do we have an agreement or not?

You do, but there has been a lot of discussion about —

Then we will continue to sell gas to Israel. Its price — we may disagree about the price — but that is commercial.

How do you see the situation turning out in Libya?

I will give you the answer Senator John McCain gave me sitting here the other day — it [the unrest] will last. It might continue for a while.

What about relations with Turkey?

[Turkish] Foreign Minister [Ahmet] Davutoglu will be in Cairo for the Palestinian reconciliation.

What aspects of your foreign policy will change? What will be different?

In Arab countries we are moving ahead — there were not the best of relations between Qatar and Egypt under President Mubarak, but that has changed with me now. We are moving towards Africa — we are going into Sudan.

So you think that Egypt should play a bigger role in the region?

And it hasn’t played that role that it always should have played?

In the last few years, no.

So your vision of Egypt is as the leader of the Arab world?

I would not use that phrase.

I heard that some Arab countries were upset about the Mubarak situation. Is that true?

Some Arab countries, yes. They liked the guy, and they were not happy about him being prosecuted.

Were the Saudis upset?

The king did express that he is loyal to his friends.

Is there anything you feel is important for Americans to know about the new Egypt?

I can tell you this — part of the new age is that the Egyptian population decided that all human rights conventions will be applicable to everyone. We would like to see a democratic country. We will abide by treaties and the rule of law.