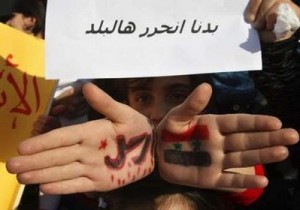 More than 200 Syrians symbolically hanged an effigy of President Bashar Al-Assad during a demonstration Sunday against his regime in front of their embassy in Amman.

The protesters accused President Assad of committing “massacres and crimes against humanity”, called for the downfall of his regime and condemned the repression of demonstrations in Syria.

“Stop the bloodshed,” read a banner they were chanting, “people want to bring down the regime. Bashar is a traitor.”

The army and Syrian security forces have carried out numerous arrests Sunday in several cities in Syria, while opponents have called for demonstrations in the country for the “lifting of the siege.”

Unprecedented protests erupted in Syria since March 15, killing at least 539 deaths, while the “Committee of the martyrs of 15 March” had counted at least 582 deaths.

“I fled Deraa 13 days ago. My family is still there and told me that the army and security forces have committed mass murder,” told AFP Imad, a Syrian of 29 who took part in the demonstration.

“People collect the corpses in the streets, but the army came and took them to conceal the crimes,” he said.

Imad and other Syrians are considering an aid convoy to Deraa “to break the siege” and more demonstrations in Amman. enneharonline

Photo: A placard that reads: We want to liberate this country.  On the palm of one  hand is shown the Syrian flag and on the other  side  the word ” get out “