I got caught in Syria’s crackdown

by yalibnan
798
This article is by an American Arabic language student who was caught in Syrian regime brutal crackdown. Ever wondered what goes on in Syrian jails ...read this
Share: 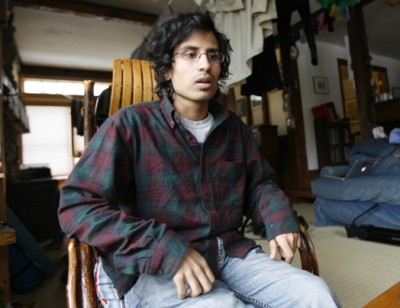 I am a student at Middlebury College, and I was planning on spending my junior year studying in Alexandria, Egypt. I did spend the fall there, polishing my Arabic skills, meeting Egyptians and traveling around the country. In January, I watched my friends, neighbors and professors join the crowds on the streets of Alexandria. I became a surprise witness to the country’s largest popular uprising in modern history.

By the seventh day of the revolution, our program evacuated, and I could choose to finish my year abroad in either Morocco or Syria. After consulting many people and doing plenty of research, Syria seemed like the clear, safe choice. After all, who could imagine a revolt in a police state?

I spent only 10 days as a student at the University of Damascus in March. In that short time, and in a December trip to the country, I explored the old cities of Aleppo and Damascus, visited the water wheels in Hama and made the breathtaking drive from Beirut to Damascus. I felt very safe; there were few signs that the country was heading down the path of Yemen, Bahrain or Egypt.

On March 18, the first day that protests in Syria attracted more than a couple hundred people, everything changed. I got caught up in the regime’s crackdown.

I was in the old city of Damascus that day to meet a friend when I unexpectedly ran into a crowd of people. I never got close enough to determine whether it was a pro-regime or anti-regime demonstration. My immediate reaction was to try to capture the moment as discreetly as possible. I had my BlackBerry out of my pocket for less than 10 seconds when I was swept up by the secret police and put in a Suburban with my head down on the seat. Five minutes later, we arrived at the prison where I spent the next two weeks. I was later told it was a secret facility on Baghdad Street. This is where I saw what it really means to live under President Bashar al-Assad’s iron fist.

The Syrian authorities appeared intent on turning me into something I am not: a CIA agent, a journalist or some other active saboteur of their regime.

During my detention I met a cross section of the hundreds of men being held in the same prison. Many told me they had been held for months or years without charge or humane treatment. They ranged from boys as young as about 14 to men as old as 70. They were mostly Syrians but included Iraqis, Lebanese and Jordanians. Most were uneducated; one was a mentally handicapped soldier who appeared to be detained solely because no one knew what to do with him.

My first cellmate told me that he was photographed by secret police at a small gathering near Damascus on a Friday afternoon, tracked down overnight and dragged out of his bed Saturday morning. He was not given enough time to put on his shoes.

One prisoner I spoke with had been arrested within days of getting married and spent most of his time worrying about whether he was going to see his new wife again. Another man had been there five months and was counting down the days until his wife was due to give birth. All he could do was pray that he’d be there to see it. No one was given any indication of when they might be released.

In addition to the emotional stress of uncertainty and interrogation, prisoners were physically abused without restraint or consequence for the perpetrators. Most of this torture was carried out in the entrance to the prison, so all could hear. I routinely saw prisoners who were beaten so severely that they could hardly walk. Some mornings there was blood on the guard’s roll call sheet.

Although my American passport probably saved me from physical harm, the secret police played as many mind games with me as with the others. For me, the hardest part was repeatedly being denied any contact with the U.S. Embassy or with my family.

I became particularly confused when, in the middle of the night, a high-ranking prison official took me from my cell and told me that if I did an interview with Syrian television, I could “go anywhere I wanted in the world.” I was suspicious and voiced my concerns, but ultimately had no choice but to do the interview. The reporter, taking cues from prison officials, had me repeat my story to the camera: “I am an American student studying abroad; no, I am not being paid; yes, I was in Egypt; but no, I am not revolution-hopping,” and so on.

After about 45 minutes of this, the same man who promised me that I would be free to leave said: “Welcome to prison. You’re going back downstairs.”

These sorts of lies continued for another week. Unlike the more experienced prisoners, I couldn’t help but believe the promises of freedom; I took whatever measures of hope I could get.

My actual release was sudden and unexpected. At around noon on Friday, April 1, I was given my belongings (except my phone and camera), had my hands zip-tied behind my back and was taken to the department of immigration. For the first hour in the immigration hall I shared a cell with a Lebanese man who had been beaten so badly that one of his toenails had fallen off.

I spent the last two hours of my detention in an immigration official’s office. For the first time in two weeks, I was treated with a pretense of courtesy. I was offered endless cups of tea and allowed to use the bathroom whenever I wanted. A representative from the U.S. Embassy finally arrived and noticed that the prison guards had taken my shoelaces. The embassy official mentioned this in passing, and a Syrian official immediately ripped the laces from his own shoes and gave them to me.

It’s almost funny now to look back on that moment of generosity — such a contrast to how I had been treated for the two weeks in custody. But as I put the laces in my pocket (denying the Syrian the satisfaction of being nice), all I could focus on was whether I was actually being released. After so many false promises, I was not ready to believe that it was really going to happen. But in fact it did, and I arrived at the U.S. Embassy in Damascus that afternoon. Then, with a deportation visa in hand, I boarded a plane to London the next morning.

Unfortunately, my experience did not reflect new government tactics. The Assad family’s brutality dates back to at least 1963, when the legal apparatus of emergency law was put in place and a “big brother” culture became part of life in Syria.

Before I traveled to the Middle East, my understanding of the term “police state” came only from the imaginary dystopias of Yevgeny Zamyatin and Ray Bradbury. The concept became more concrete during my time in Saudi Arabia, Yemen and eventually Egypt. But I didn’t truly appreciate its meaning until I was in Syria.

In my first few days in Damascus, if I asked new acquaintances about politics, they would grin and usually refuse to answer, or at best joke about their “freedom” to speak openly. The fear of retribution was clear.

To add to the tension, Assad hides the police in plain sight. Laws are enforced by a network of plainclothes officers that could include a neighbor, a cabbie, even friends and family. The paranoia had reached the point that, in the words of one Syrian, “if someone is looking at me, then I know they are secret police.” My arrest, detention and interrogations were all carried out by secret police. The first time I saw a uniformed official was the afternoon of my release.

When I got home I discovered that, while I was in prison, thousands of people were taking to the streets across Syria in anti-government protests. As expected, hundreds are being imprisoned, tortured and killed in the regime’s attempt to frighten the country back into submission, despite condemnation from the international community.

“Everything is more beautiful when you are free,” one of my fellow prisoners, a Syrian man, told me when I asked about his favorite part of his country. I understand this now more than ever and I hope that those I met in prison, and their countrymen, will experience the beauty of freedom again soon.

Pathik Root, ( pictured) a junior at Middlebury College, blogs about the Middle East at mideastreports.wordpress.com.