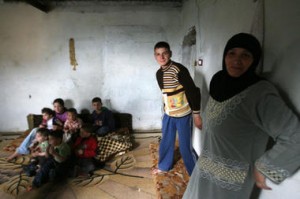 Hundreds of residents of Tel Kalakh in western Syria have escaped an intensifying siege by the Syrian army by slipping across the nearby border with Lebanon.

“They are terrorizing the town,” says Ammar, a 33-year-old taxi driver. “The people are living in fear there.”

The stories told by the frightened refugees of Tel Kalakh highlight the repressive tactics used by President Bashar al-Assad’s regime as it struggles to stifle a pro-democracy uprising. against his family’s 40-year rule.

Tel Kalakh, a town of some 20,000 mainly Sunni residents is surrounded by villages populated by the minority Alawite sect, an offshoot of Shiite Islam, which forms the backbone of the Syrian regime.

Anti-regime protests took hold in Tel Kalakh in response to the regime’s harsh crackdown against Deraa in southern Syria, which has become the epicenter of the six-week uprising in south.

As the demonstrations in Tel Kalakh grew, the Syrian security forces flooded into the area. Residents say that the security forces attempted to recruit assistance from the surrounding Alawite villages, adding a sectarian edge to the local tensions.

“The army sent tanks into the town and set up blockades on all the main roads. I was told at one checkpoint that I should leave because they were planning to raze the town to the ground,” Ammar said.

Footage of the demonstration carried on his cellphone showed protesters brandishing banners in English reading, “We don’t want you” and “Go out Bashar.”

Sheikh Abdel Rahim Akkari, the town’s cleric, is seen speaking to the crowd and denouncing the regime’s accusations that the protests are stirred by Islamic extremists.

“Where are the Salafists you are looking for?” Sheikh Akkari asked rhetorically. “They are all in your prisons. All we are asking for is our freedoms.”

An estimated 2,000 residents, mainly women and children, had fled the town two days earlier on Wednesday, walking the two miles to the border with Lebanon. Some of the women were molested by a group of military intelligence officers and Alawite “Shabiha” militiamen on the border, residents said. The harassment of the women spurred a squad of Syrian border guards, usually composed of locally-recruited personnel, to attack the intelligence officers and militiamen, they added. A small border post was burned to the ground.

A growing number of accounts is emerging of in-fighting between the Syrian security forces, usually involving Sunni conscripted soldiers clashing with Alawite troops in elite divisions and intelligence personnel. Residents of Tel Kalakh said that Alaa Shwaiti, a young lieutenant from the town, was executed with a bullet in the head after he refused to open fire on protesters in Homs, a city in northern Syria and one of several flashpoints where the regime has cracked down hard against signs of dissent.

“He telephoned his brother in Tel Kalakh before he died and said that he feared he was going to be executed for disobeying the order,” Ammar said.

According to residents, the Syrian army claimed Lieutenant Shwaiti was killed by rebels and made plans to bury him in Tel Kalakh with full military honors. But the residents refused and buried the officer themselves on Saturday.

Contacted by cellphone, a man inside Tel Kalakh said that Lieutenant Shwaiti’s funeral had just been held amid a large army and security presence.

“We are besieged right now,” the man said.

Meanwhile, Syrian army tanks shelled the old quarter of Deraa and dispatched more reinforcements to the area, which has been under siege for nearly a week, an eyewitness told Associated Press.

Residents have remained defiant: Unable to leave their homes, they have chanted “God is Great!” to each other from their windows in the evenings, infuriating security forces and raising each other’s spirits.

Deraa has been without water, fuel or electricity since Monday, when the regime sent in troops backed by tanks and snipers to crush protests seeking an end to Assad’s authoritarian rule.

On Saturday, Syrian troops killed four people while storming a mosque that became a focal point for protesters in Daraa, and security forces in Damascus kept dozens of women from marching on parliament to urge Assad to end his crackdown on the uprising.csm