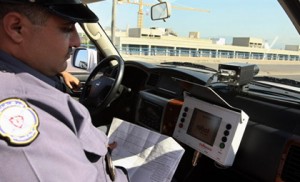 ISF reported that the radar speed enforcement system has reduced the number of accidents in the country.

ISF urged the citizens to observe the following speed limits in the absence of any speed limit signs:

ISF reminded the citizens that the Radar Patrols are working day and night in various areas of Lebanon with the aim of reducing traffic accidents and to preserve public safety.

ISF told the citizens that they can access the Internal Security Forces website WWW.ISF.GOV.LB to find out if they have been ticketed for speed . ISF also urged the citizens to contact LIBAN POST customer service at 01- 629629 for any change in addresses. ”

Lebanese Minister of Interior and Municipalities, Ziad Baroud said last December :” The fixed and mobile radars have proved highly effective and reduced the number of traffic accidents and death toll from these incidents by more than 50%… a significant and important drop .”

The radar speed enforcement system was deployed last November in an attempt to reduce traffic accidents by ticketing violators at 50,000 LL ($33.33) each.