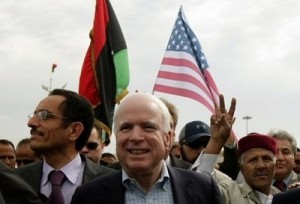 U.S. Sen. John McCain praised Libya’s rebels as his “heroes” in a visit to their de facto capital Friday, a day after the United States started flying armed drones to bolster NATO firepower and try to break a battlefield stalemate with Moammar Gadhafi’s forces.

Rebels in the western city of Misrata, besieged by Gadhafi troops for nearly two months, raised their tricolor flag atop an eight-story building in celebration after driving pro-government snipers out of it and neighboring buildings Thursday.

The building commands a strategic view of the central part of Libya’s third-largest city and the key main thoroughfare of Tripoli Street, and the snipers had terrorized residents and pinned down rebel fighters.

“Spirits are high but the military situation is still unknown,” said one rebel who spoke on condition of anonymity because he feared retaliation. “The rebels easily entered yesterday, so it was clear that the Gadhafi forces quickly withdrew.”

Hundreds of people have been killed as government forces have attacked the rebel-held city, with NATO’s air campaign largely unable to strike at the attackers because of their proximity to civilians. The deployment of Predator drones could be more effective. U.S. Marine Gen. James Cartwright said the drones “are uniquely suited for urban areas,” with their ability to fly lower and counteract the pro-Gadhafi forces’ tactic of traveling in civilian vehicles that are difficult to distinguish from those of rebel forces.

The first Predator mission since President Barack Obama’s go-ahead was flown Thursday, but the aircraft — armed with Hellfire missiles — turned back due to poor weather conditions without firing any of its munitions, Cartwright said.

McCain, one of the strongest proponents in Congress of the U.S. military intervention in Libya, said he was in Benghazi “to get an on-the-ground assessment of the situation” and planned to meet with the rebel National Transition Council, the de facto government in the eastern half of the country, and members of the rebel military.

“They are my heroes,” McCain said of the rebels as he walked out of a Benghazi hotel. A few Libyans waved American flags as his vehicle drove past.

McCain, The top Republican on the Senate Armed Services Committee, is the highest level American official to visit the rebel-held east, giving a boost to the anti-Gadhafi forces. Details of the trip were shrouded in secrecy due to heightened security in a country fiercely divided by the two-month-old anti-Gadhafi rebellion.

Invoking the humanitarian disasters in Rwanda and Bosnia in the 1990s, McCain pressed for U.S. military intervention in Libya in February, weeks before the U.N. Security Council authorized military action to protect civilians and impose a no-fly zone.

When Obama acted with limited congressional consultation, McCain — who was the 2008 Republican presidential contender running against Obama — defended the president, saying he couldn’t wait for Congress to take even a few days to debate the use of force. If he had, “there would have been nothing left to save in Benghazi,” the rebels’ de-facto capital.

But as the U.S. handed operational control over to NATO — and withdrew U.S. combat aircraft — McCain criticized the administration.

“For the United States to withdraw our unique offensive capabilities at this time would send the wrong signal,” McCain said. He said the U.S. must not fail in Libya and said he spoke as someone experienced in a lost conflict, a reference to his time as a prisoner of war in Vietnam, where he served as a Navy pilot.

McCain also has pushed for arming the rebels, saying the U.S. and its partners cannot allow Gadhafi to consolidate his hold on one section of the country and create a military deadlock.

Also Friday, a fourth ship chartered by the International Organization for Migration is leaving Benghazi to evacuate stranded migrant workers and wounded civilians from Misrata.

The latest voyage, which will also bring 160 tons of food, medical supplies, tents and mattresses to residents trapped in the city by the fighting, follows three earlier evacuations of more than 3,100 people from Misrata on another IOM-chartered vessel, the Ionian Spirit. AP