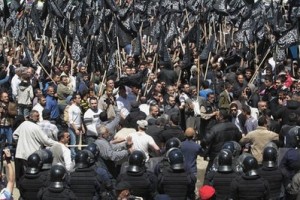 The protesters left the Great Mansouri Mosque in Tripoli after Friday prayers and gathered in a square about one hundred meters from the mosque, amid tight security measures as the Lebanese army deployed throughout the rally route and the city’s main neighborhoods. They were “raising Islamic flags and chanting slogans in support of the Syrian people.”

They highlighted the importance of the firm implementation of a decision taken by the North branch of Lebanon Security Council to ban demonstrations in Tripoli.

Earlier this week, security authorities banned the party’s planned demonstration against the Syrian regime. The ban was lifted once the protest organizers agreed to change the venue. The initial venue was Nour Square, located 500 meters from the mosque in the city

Tripoli Mufti Sheikh Malek al-Shaar told Voice of Lebanon radio station that agreement has been reached for the rally to take place within the premises of al-Mansouri mosque.

“Let them express their opinion in a way that they don’t pose a challenge to other movements” in the city, he said. “There won’t be any clashes because everyone is aware that the security and stability of the country is a priority.” He said