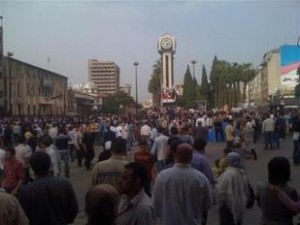 The Syrian army deployed overnight in the flashpoint city of Homs, witnesses said, ahead of Friday prayers that have been marked by intensifying protests in the last five weeks against authoritarian rule.

The prayers will test whether President Bashar al-Assad’s decision Thursday to lift emergency law, imposed by his Baath Party when it took power in a coup 48 years ago, will defuse mass discontent with repression and corruption.

Aided by his family and a pervasive security apparatus, Assad, 45, has absolute power in Syria.

More than 220 protesters have been killed since pro- democracy protests erupted on March 18 in the southern city of Deraa, including 21 protesters killed this week in Homs, rights campaigners say.

A decree Assad signed Thursday that lifted emergency law is seen by the opposition as little more than symbolic, since other laws still give entrenched security forces wide powers.

Human Right Watch said Assad “has the opportunity to prove his intentions by allowing (Friday’s) protests to proceed without violent repression.

A rights activist said trucks carrying soldiers and vehicles equipped with machine guns were seen on the main highway from Damascus to Homs, a central city that has emerged as the new focal point of protests.

Residents organized neighborhood patrols after 21 protesters were shot dead Monday and Tuesday by security police and gunmen known as ‘al-shabbiha’.

“We are determined on totally peaceful protests… we rejoice at the downfall of the state of emergency. It was not lifted, it was toppled… With the help of God, we will embark on freedom,” a comment on a Facebook page run by activists said.

Emergency rule has been used since Assad’s Baath Party seized power to justify arbitrary arrests and detention and a ban on all opposition.

Assad’s conciliatory move to lift the state of emergency followed a familiar pattern since the unrest began a month ago: pledges of reform are made before Friday when demonstrations are the strongest, and are usually followed by an intense crackdown.

The authorities have blamed armed groups, infiltrators and Sunni Muslim militant organizations for provoking violence at demonstrations by firing on civilians and security forces.

Western and other Arab countries have mostly muted their criticism of the killings in Syria for fear of destabilizing the country, which plays a strategic role in many of the conflicts in the Middle East.

Syria is technically at war with Israel but has kept its Golan Heights front with the Jewish state quiet since a 1974 ceasefire. It has long borders with Iraq, and supports the Palestinian Islamist group Hamas and the Shi’ite Hezbollah movement in neighboring Lebanon, also backed by Iran. Reuters