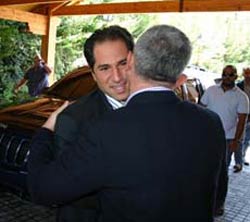 According to a statement issued by the Phalange party, Gemayel said that “the visit comes within the framework of the parties’ efforts to facilitate the endeavors of Maronite Patriarch Beshara Boutros al-Rai” in order to ensure rapprochement between Lebanese Christian politicians.

“We cannot give up on reconciliation of Christian parties .” Gemayel said.

This comes after Central News Agency (CNA) reported on Tuesday that upon his return to his residence in Maarab from the Bkirki meeting , Lebanese Forces leader Samir Geagea ordered his media department and all those concerned to show FPM and Marada Movement the same courtesy they show to the Phalange and National Liberal Parties and the National bloc.

A meeting was held on Tuesday between the country’s top Christian officials in Bkirki .The meeting was described as “brotherly and patriotic par excellence,” according to a statement released by the patriarchate after the talks.