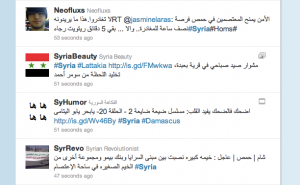 That failed miserably and ended up being an embarrassment.

Now, they are effectively diluting the discussion and making it much harder to find any info about the protests by bombarding the popular relevant hash tags with badly disguised spam.

The creation of various spam accounts that mainly target #Syria hash tag; flooding it with predetermined set of tweets– every few minutes–about varied topics such as photography, old Syrian sport scores, links to Syrian comedy shows, pro-regime news, and threats against a long list of tweeps who expressed their support of the protests. Bahrain based Eghna Development and Support is responsible for hosting the “political campaign solutions” for the Syrian regime.

The spam accounts have been reported by many users, but Twitter has been slow to respond and apply their Terms of Service that clearly prohibit “overloading, flooding, spamming, mail-bombing the Services, or by scripting the creation of Content in such a manner as to interfere with or create an undue burden on the Services.”

Twitter is currently one of the main platforms used by dissidents and activists to disseminate information and videos of the ongoing protests, and uncover the crimes committed by the regime’s security forces against unarmed peaceful protesters. It is of utmost importance to ensure that their voices are heard. We must provide the general public and international media easy access to such information. Crimes unnoticed are crimes unpunished.