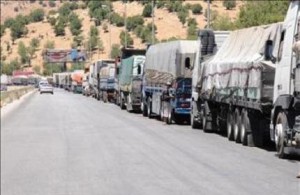 ‘Between 400 and 500 trucks are now stuck at the border crossings between Lebanon and Syria after the Syrian authorities enforced heavy security measures at its borders, to prevent any arms shipments into the country,’ the source said.

‘The inspection of each truck is taking about one hour,’ he added.

Lebanese custom officials at the border could not confirm or deny the news item.