How Many Bad Fridays Can Assad Afford? 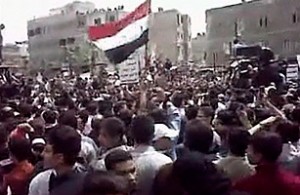 Syria could very well learn its fate this Friday. According to a source from the country with close ties to the regime, if large-scale demonstrations break out after midday prayer in Syria’s two largest cities, Damascus and Aleppo, the regime will be faced with a stark choice: either crack down with unlimited violence, or meet the demonstrators’ demands. In either case, Syria is looking into an abyss.

The regime is in uncharted waters. In 1982 President Hafez al-Assad, the father of the current president, ordered the shelling of the town of Hama, killing more than 10,000 people to put down an uprising of the Muslim Brotherhood, because he was worried about a general uprising of Sunnis against the minority Alawites who rule Syria. Assad feared that the Alawites would not only be driven from power but also face the real risk of slaughter. As of now his son Bashar has apparently ruled it out, if for no other reason than it is unlkely to turn the tide as it did in 1982. Indeed, he appeared to be trying to calm the public anger. On Thursday, he met with a large delegation from the town of Dara’a, the epicenter of the demonstrations. See TIME’s video “Displaced Iraqis Vulnerable in Syria.”

The regime has also said it would study whether to lift the 1962 emergency laws and, perhaps, hold elections. But so far, the government’s half-measures have not kept the populace from coming out Friday after Friday in more and more cities with each passing week. I asked my Syrian friend what happens if this Friday does go badly. He said: “There are a lot of people on the inside who are asking how many more bad Fridays Bashar can survive. Two? Three? Who knows.”

What’s really rattled Bashar al-Assad is that the demonstrations have turned decidedly sectarian. The demonstrators are laying all Syria’s problems, from corruption to unemployment, at the feet of the Alawites — the sect the president and his family belong to. The Alawites, who are an offshoot of Shi’a Islam, make up only 12%-to-14% of Syria’s population. But, in lieu of popular support, they’ve ruled Syria for more than 40 years thanks to a tight grip on the military and the security services.

The complaint most widely voiced by the demonstrations is against corruption. Yet, though the Alawites are party to the problem, the Sunni elite enjoys its fair share. The real problem between Sunnis and Alawites is that Sunni fundamentalists consider the Alawites heretics, unqualified to govern a Muslim country like Syria. See Protest Spread in Syria

Assad is also hamstrung by the idea of relaxing his autocratic rule because the only group organized and popular enough to benefit from such a Syrian perestroika is the currently outlawed Muslim Brotherhood, which Damascus believes is fomenting trouble from enclaves in neighboring Lebanon. In fact, according to my well-connected friend, Syria last year considered using armed forces against Tripoli to clear out the Brotherhood based in that Lebanese city.

The sporadic clashes this week between protesters and security forces in the coastal Syrian town Baniyas have only fueled the regime’s fears. Baniyas has long been known as a hotbed of Islamic militants, and could turn volatile because weapons are easily smuggled across the porous border with Lebanon. The Islamist theme has thus been sounded from the very beginning of the uprising. Dara’a, the town where the original demonstrations broke out, is also known for its conservative Sunni politics.

A former Middle East CIA field officer, is TIME.com’s intelligence columnist and the author of See No Evil and, most recently, The Devil We Know: Dealing with the New Iranian Superpower.