The uprising in Syria is spreading, with reports of members of the president’s family tribes joining in the movement seeking his ouster, observers said. 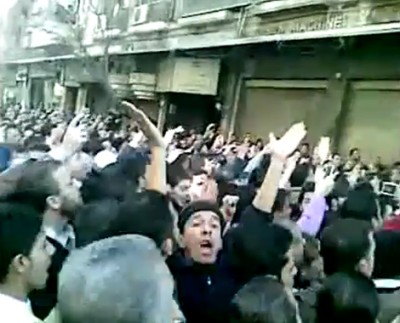 In response, President Bashir Assad mobilized military and security forces, ordering them to shoot to kill and not allow ambulances to collect the wounded..

Intelligence sources reported that the Druze were rebelling in Syria’s mountain region, as were protesters in the Kurdish town of Kamishli and the Shammar tribes of southeastern Syria.

Intelligence sources also reported that Damascus University has been under siege for four days.

The military have blocked main roads linking northern Syria to central and southern points, witnesses said. Telephone, Internet services and food deliveries in many places have been disrupted.

Reports of troops firing on demonstrators and denying medical care for the wounded drew sharp criticism from the Obama administration. In a statement issued in Washington, the administration expressed deep concern about the reports.

“The escalating repression by the Syrian government is outrageous, and the United States strongly condemns the continued efforts to suppress peaceful protesters,” the statement said. “President Assad and the Syrian government must respect the universal rights of the Syrian people, who are rightly demanding the basic freedoms that they have been denied.” UPI