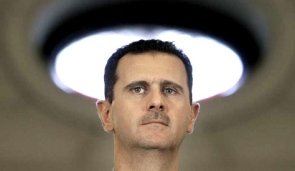 An article published in the Haaretz newspaper reveals that Syrian president Bashar al Assad is Israel’s favorite dictator. He has so much support there as though he is the king of Israel.

According to the article the so called  Syrian “resistance” government has not uttered a peep on the Golan front since 1973.  Instead, the “resistance” regime was and still is ready to fight Israel to the last Lebanese, and if that doesn’t do the trick – then to the last Palestinian.

Here is the complete article as appeared in the Haaretz newspaper on March 29,2011

As strange as it sounds, everyone in Israel loves Arab dictators. When I say everyone I mean both Jews and Arabs. The favorite dictator of all is president Assad. As Assad junior inherited the oppressive regime in Syria, so did both Jews and Arabs transfer their affection for the dictator from Damascus from Assad senior to his son.

Following the intifada in the Arab states, Bashar al-Assad maintained in an interview to the Wall Street Journal that the situation in Syria is different, adding that Syria is not like Egypt. He also emphasized that Syria was not susceptible to sliding into a similar situation, because it was in the “resistance” front and belongs to the anti-American, anti-Israeli axis.

Well, Assad is right. The situation in Syria is indeed different. The Syrian regime is more like Saddam’s defunct regime. The Ba’ath Party that ruled Iraq and the one still ruling Syria both held aloft flags of pan-Arab national ideology. But slogans are one thing and reality is another. All the ideological sweet talk was only talk. For the Ba’ath Party, both in Iraq and in Syria, constituted a political platform to perpetuate tribal, ethnic oppression.

Indeed, the situation in Egypt is completely different. If we put aside the Coptic minority, then Egyptian society is homogenous religiously and not tribal at all. The demoted Egyptian president, Mubarak, never had a tribal-ethnic crutch to lean on. The Egyptian army is also different and not at all like the Syrian or Iraqi armies.

For example, when the United States invaded Iraq, the Iraqi army splintered into its tribal and ethnic fragments. The soldiers took off their uniforms and each joined his tribe and ethnic community. Saddam too adhered to those tribal codes. He did not flee Iraq but went to hide in the well-protected areas of his tribesmen. This is what happens in these societies. In the land of the cedars, as soon as the civil war broke out, the Lebanese army dissolved into its ethnic components and disappeared.

True, Syria is not Egypt. Syria is also different in terms of the price in blood inflicted by the tyrannical Syrian regime. The Syrian tribal government is based on the force exercised by the security branches ruled by the tribesmen and their interested allies.

Inherently, a tribal regime of this kind will always be seen as a foreign reign. This kind of reign can be called tribal imperialism, which rules by operating brutal terror and oppression. This is underscored when a minority tribe rules, like in Syria. Thus every undermining of the government is seen as a challenge to the tribal hegemony and a danger to the ruling tribe’s survival. Such a regime by its very nature is totally immersed in a bloodbath.

Both Assad senior and Assad junior advocated resistance against Israel. This slogan was hollow, serving the regime merely as an insurance policy against any demand for freedom and democracy. The Syrian “resistance” government has not uttered a peep on the Golan front since 1973. Instead, the “resistance” regime was and still is ready to fight Israel to the last Lebanese, and if that doesn’t do the trick – then to the last Palestinian.

As voices in Israel have recently spoken out in favor of Hamas’ continued rule in Gaza, so many Israelis are worried these days over the Syrian regime’s welfare. Astonishingly, not only Jews are praying secretly for the Damascus regime’s survival, but many in the Arab parties as well. These parties’ leaders have been dumbstruck, their voices have been muted and no outcry has been raised against the Syrian regime’s massacre of civilians.

All the hypocrites, Jews and Arabs alike, have united. It seems Assad has wall-to-wall support here, as though he were king of Israel