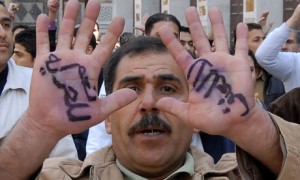 Syria’s autocratic regime was this week facing a grave test of its four-decade rule as a protest movement gathered momentum across the country, demanding widespread reforms and an end to repressive rule.

President Bashar al-Assad was expected to this week make his first public statement since rolling demonstrations began in mid-March. He has pledged changes in government that would “make the people happy”, but was struggling to contain deep distrust in the country’s towns and cities, where large numbers of people are now in open defiance of laws banning dissent.

The scenes are without precedent during Assad’s 11 years as president and were extremely rare during the three decades prior to that when his father, Hafez al-Assad, ruled Syria with an iron fist.

Syria has been under emergency law for all of that time and its citizens have been forced to defer to the ruling Ba’ath party, which has been buttressed by the power of the region’s most formidable police state.

More than 150 people – almost all of them demonstrators – were thought to have been killed last week. The most severe clashes were reported in the southern city of Deraa, near the Jordanian border and in the port city of Latakia in the north, where residents reported being chased through the streets by government gunmen.

Amateur video footage has shown government buildings being torched and posters and statues of Assad and his father being defaced. Images have also been shown of security forces gunning down unarmed demonstrators, in scenes that have drawn widespread international rebuke.

Assad had earlier tried to stay ahead of the protest movement that is sweeping the Arab world by offering a string of minor concessions and by releasing up to 260 political prisoners. He has cut compulsory military service for men by three months, introduced subsidies for cooking and heating fuels, and opened internet access to social media – ironically the tools that were widely used to organise revolutions elsewhere in the region.

He was expected this week to lift emergency laws on the press that greatly restrict independent reporting. However, he faces the increasingly difficult task of convincing the country’s largely impoverished citizens that the old guard can offer the same political rights that were seized by demonstrators in Tunisia and Egypt.

“This is what this is all about for us,” said one Syrian businessman in the Lebanese capital, Beirut. “We want the same opportunity that everyone else is getting. We will not be taken for granted anymore.”

Another Syrian, who also refused to be named, outlined the fear felt by many in Damascus as the tide of full-blown revolt draws near. “There are a lot of people invested in the status quo,” he said. “And there are good reasons for that. Stability has been paramount in Syria and it is a formula that has delivered safety for many and success for some.”

Syria’s ruling class almost exclusively stems from an Alawite sect, an offshoot of Shia Islam. The majority of its citizens are Sunni, and there are Christian and Druze minorities.

Syria has long been prominent in the geopolitics of the region, but has taken on increasing importance over the past three years as the US has tried to disengage it from Iran, which acts as a main patron. Israel has also tried to lever Syria free from Iran and from the Lebanese militia, Hezbollah, which both heavily support.

While US secretary of state Hilary Clinton has condemned the use of violence by security forces, US lawmakers have been restrained in their criticism, describing Assad as a reformer and insisting that the western military intervention to protect civilians in Libya will not be repeated in Syria.

The US recently returned an ambassador to Damascus after an absence of more than five years, during which the Bush White House had accused Assad of allowing his border with Iraq to be used as a turnstile for insurgents who wanted to fight US troops.

However, suspicions have remained about Syria’s role in the region and its motivations, with both near neighbours, Iraq and Lebanon, convinced that its rulers are continuing to play a pervasive role in their countries.

“That is why we are looking at what is happening to Assad with such utter fascination,” said one Lebanese member of parliament. “The circle has turned for him and he is learning that he can no longer get by with the thuggish ways of the past.”

As has been the case in Libya and Bahrain, Syria’s rulers have blamed the uprising on outside forces. Buthaina Shaaban, a top adviser to Assad, said “armed gangs” had been responsible for the chaos. Anti-foreigner sentiment is running high and numerous reporters have been deported.

The government has mounted an intensive propaganda campaign, sending demonstrators to the streets of the capital. Last Saturday, hundreds of families drove through the city waving flags and chanting “God, Syria and Bashar only”.

“This next week will be crucial in seeing whether Assad has the strength, or the wisdom, to lead the country out of this,” said the Syrian businessman. “He knows that things must change. This is no longer something that he can window dress. If that is the new reality, then that is a good result.” Guardian

Photo: A protester in Syria shows his hands with the message ‘Yes for freedom, no to violence”. More than 150 people – almost all of them demonstrators – were thought to have been killed last week.