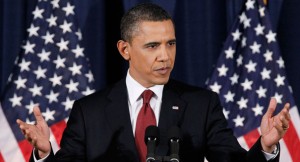 US President Barack Obama issued a broad defense of his decision to pursue military action against Libya in a speech to the country tonight, arguing that intervention was a necessary step to prevent a “massacre” in the country.

The speech came nine days after the first military action and amid widespread criticism from Members of Congress that the president had not done enough to explain to the American people why force was being used against Libya.

Our first thoughts on the speech are below. What did you think? The comments section is open for business.

* Arguing the negative: Obama spent a considerable amount of time talking about how bad things might have been if the U.S. hadn’t intervened exactly when we did. He repeatedly referred to a “massacre” that had been averted and said that Libya had been “faced with the prospect of violence on a horrific scale”. The “you should have seen how bad it could have been” argument is always a tough one to sell in political terms. People struggle to imagine what might have been — particularly in a country as far removed from most peoples’ minds as Libya. Still, this was the brunt of Obama’s argument in the 30-minute speech and the source of some of his best lines. “I refuse to wait for the images of slaughter and mass graves before taking action,” Obama said in what will almost certainly be the most oft-quoted phrase of the night.

* Learning the lessons of history:At alternate points in the speech, Obama made reference to the Iraq war and the U.S. action against Bosnia to suggest that his Administration had acted forcefully and effectively in comparison. In regards Bosnia, Obama said it took the U.S. a year to intervene as compared to just 31 days in Libya, evidence, he argued, of a swift reaction that averted atrocities. Obama cited Iraq to argue against those who push for regime change in Libya; “We went down that road in Iraq,” said Obama. While neither George W. Bush nor Bill Clinton likely enjoyed that segment of the Obama address, it was designed to show that he was a student of (recent) history and had no illusions about the need to get in and, more importantly, get out of Libya quickly.

* Mission accomplished: Obama, of course, didn’t say those words. (No politician is likely to ever utter that phrase again after Bush made it infamous during the Iraq war.) But the message was crystal clear. “We have stopped Gaddafi’s deadly advance,” Obama said early in the speech. Later, he was even more forceful: “The United States of America has done what we said we would do.” Senior White House aides insisted in the runup to tonight’s speech that they wanted to wait until Obama could credibly make the case in a speech that the actions of the U.S. had clearly had their intended effect — allowing him to effectively close the loop on Libya. He made that case tonight. Now the question is whether the public will accept it and whether events on the ground will reflect that rhetoric.

* America, the exceptional: Obama began and ended the speech by touting the special role that America — and American values — have in the global community. Obama’s opening line described the U.S.’s “unique role as an anchor of global security” and he kept hitting on that same them as the address unfolded. Obama said that bypassing intervention in Libya given the stakes “would have been a betrayal of who we are”, adding: “The United States of America is different.” Appealing to peoples’ collective sense of pride and patriotism is a savvy approach to rally a skeptical country around the necessity of intervention in Libya. In using that sort of exceptionalism argument, Obama was making the case that we needed to go into Libya because something fundamental about who we are as Americans — freedom — was at stake. “Wherever people long to be free, they will find a friend in the Unites States,” Obama promised, further driving that rhetorical point home. WP