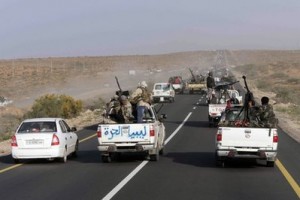 Suliman Abdul Mula was not surprised when he saw the white flag waved by a group of Muammar Gaddafi’s soldiers caught between western air strikes and the rapid advance of Libya’s rebels. “We saw they raised the white flag. We thought they no longer wanted to fight for Gaddafi. They are losing and no one in Libya wants to die for Gaddafi any more,” said the 31-year-old. “But when we approached, they opened fire. It was a trick.”

Several of the rebels were wounded, including one whose left arm was hanging by a string of flesh.

Another soldier with Mula estimated that there were 100 or more government soldiers in the group flying the white flag as the rebels pushed forward to within 50 miles of the strategically and politically important town of Sirte where Gaddafi was born. The soldier said that as soon as the rebels got close enough, Gaddafi’s forces shot at them with machine guns.

“Everyone knows the white flag if for surrender. These are Gaddafi’s dirty tricks,” he said.

It was also a further indication that the regime’s forces have not given up the fight in spite of the punishing western air strikes and a growing confidence among the revolutionaries that Gaddafi’s rule is on the brink of collapse.

The rebels initially continued their rapid push toward Sirte, a city of about 100,000 people, using the cover of air strikes. But by the late afternoon on Monday they were fleeing en masse from their frontline staging post at Wadi al-Ahmar as repeated barrages of rocket suggested the rebels’ 200 mile advance in three days, most of it without the need to fire a shot, had ground to a halt.

Foreign air forces kept up their pounding of the Libyan dictator’s weapons. The explosions could be heard from the rebel lines. The insurgents assumed the planes were hitting tanks, artillery and armoured vehicles as part of the continued destruction of Gaddafi’s ability to fight that began on the edge of Benghazi about 300 miles to the east.

That did not stop the regime’s forces from putting up a strong defence of their positions before Sirte with, at times, intense artillery barrages in which at least five rebels were killed.

The government in Tripoli has pledged to defend Gaddafi’s birthplace to the last, in part because of its strategic significance on the coastal road toward the capital.

Its loss would open the way to Libya’s second largest city, Misrata, which is mostly in rebel hands despite a siege by government forces. Beyond Misrata lies Tripoli.

The fall of Sirte would also perhaps be a fatal political blow to the regime, indicating that it can no longer put up a military defence.

The revolutionary leadership is attempting to subvert the regime’s plans to defend Sirte through contacts with tribal and other local leaders in the town in an attempt to encourage an uprising that would help the rebels move in.

The assumption of many of the revolutionaries is that Gaddafi’s forces will be ground down and their armour destroyed by the continuing western air strikes.

Mula had not been surprised by the white flag because, like many of the rebels, he cannot understand why anyone would continue to fight for Gaddafi.

Clearly the air strikes and defeats are taking their toll on his army. Hospitals report significant numbers of deaths and injuries, and that some government soldiers are faking injuries to avoid the fighting.

Others are deserting. Close to a mosque near the frontline, an entire military uniform was discarded – black boots, plain olive green jacket and trousers – presumably by one of Gaddafi’s fighters hoping to escape combat or capture by passing as a civilian.

But he may have found it difficult to hide. There are not many residents left in the string of villages and small towns the length of the coastal road between Ajdabiya and Sirte.

On the other side, the sudden reversal in the rebels’ fortunes because of the western air strikes has brought floods of volunteer fighters to the front, although many are of limited value.

On Monday, one group arrived in a yellow Hummer, another in a white Toyota Corolla with tyres desperately in need of air. They waved guns and V for victory signs, and chanted “Sarkozy, Sarkozy” in gratitude for the French president’s recognition of the revolutionary administration and his leading role in organising the air strikes.

Reaching the front is a challenge in itself because of a shortage of fuel along the 300-mile drive from Benghazi, the nearest town with a consistent petrol supply. Petrol stations are abandoned or destroyed.

Those still with fuel do not have functioning pumps and so crowds gather to lower plastic bottles in to the underground tanks and painstakingly fill their cars. For some it may be the most danger they will face all day as the smell of petrol fumes does not deter some of the waiting drivers from smoking.

As the sun went down, and the rocket fire crept closer to Wadi al-Ahmar, the rebel fighters lost their nerve and a sudden retreat began as hundreds of vehicles headed east at speed, finally stopping after about 30 miles in the town of Bin Jawad.

But the revolutionaries remain certain of ultimate victory after the sudden turnaround in their fortunes brought on by the air strikes. Some shouting that Gaddafi is finished. Others repeatedly thanking France and Britain for the air strikes that they assume are intended to bring about regime change whatever may be said in Paris or London about the operation being limited to protecting civilians lives.

“We will be in Tripoli in two days, maybe three,” said Walid Ali, an evidently optimistic rebel fighter who is at other times an accountant for an oil subsidiary.

“Gaddafi will be gone before the end of the week. We thank Sarkozy and Cameron for getting rid of him. Their friends in Libya will always remember them.” Guardian