Protests in Syria: Road to Damascus 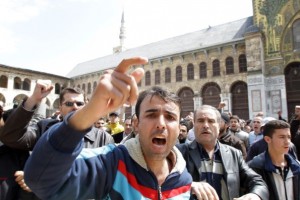 AS RECENTLY as Thursday, few were willing to predict whether calls for protests in solidarity with the people of Deraa would spread across the rest of Syria. Security forces have killed at least 37 people in Deraa, a city at the heart of a farming region in the south, about an hour’s drive from the capital, since people there took to the street a week ago.

The protests had been triggered by the detention of a group of teenagers who had been caught drawing anti-government graffiti, but the protesters demands have since grown to calls for freedom—though not, at this point, for an end to Syria’s president, Bashar Assad.

Yesterday their calls were joined. Large crowds once again took to the streets in Deraa and the nearby town of Sanamein. More significantly, they spread: smaller protests were reported in the cities of Homs, Hama, Raqqa, Banias, Latakia and Damascus. Once again the police used force to put them down. As many as 20 may have been shot dead by security forces in Sanamein, apparently after they had set fire to a statue of the former president, Hafez Assad, Bashar’s father. Three protesters were reported to have been killed in a district of Damascus and at least two more in Lattakia.

Less than 24 hours before, the government had pledged not to use violence. The Syrian government’s confused response to these unprecedented protests has involved dangling a small carrot or two, as well as swinging its heavy truncheon. On Thursday evening it announced concessions that were supposed to quell the unrest: a pledge to look into lifting emergency law, which has been in place since 1963, and promises to draft new laws governing the media and political parties.

But the lack of concrete reforms only added fuel to the fire. New laws have long been on the table. Syrians—and the international community—are rightly outraged at the use of force. Yesterday Amnesty International said the death toll had climbed to at least 55; scores more have been injured.

Until now, many young Syrians had been willing to tolerate widespread corruption and suppression of basic freedoms in exchange for a “pro-resistance” foreign policy and vague talk of reform. But that bargain is starting to lose its appeal. Distressing, graphic video footage emerging from Deraa and Sanamein are casting Mr Assad’s rule in a different, more brutal light.

His regime is usually regarded as being canny, and relatively nimble. That is not the way it looks this week. No one outside its inner circle knows exactly what is going on. Unlike some of the region’s monarchs, Mr Assad is finding it harder and harder to project an image of himself as being above the fray. Some critics are casting him in the same mould as his father, who crushed the last major domestic uprising, staged by the Muslim Brotherhood, with a massacre in Hama in 1982 in which perhaps 20,000 died. Other figures, including the main presidential adviser, have tried to exculpate Mr Assad. This has in turn led to rumours that Bashar is being countermanded within the regime, possibly by his brother Maher.

Meanwhile, the protests are getting more organised. The Syrian Revolution 2011 page on Facebook, not itself a spark for the protests, has become a focal point. Run predominantly by expatriate Syrians, it has disseminated tips for holding a successful demonstration. By posting videos of the dead and injured and promoting a show of national unity, it is building the rallying power that Syrian opposition figures had long struggled to find.

What happens next? Some fear it will be a race to the bottom, with the protests escalating in step with the state’s violence. Some citizens of Lattakia, the home to Mr Assad’s minority Alawite sect, have started packing up. The Syrian pound’s value on the black market has dropped. There are certainly many outside the country who would like to see Mr Assad go.

But Syrians may still step back. For a country of 22m people, turnout at the protests has till now been relatively low. Huge pro-Assad rallies have been charging round the capital for the past few nights. Few believe their noisy declarations of love for the regime to be spontaneous, but Mr Assad undoubtedly enjoys support. Rising sectarian chants emanating from Deraa, an orthodox Sunni area, have provoked fear elsewhere.Syria is home to large groups of Christians and Druze, as well as Alawites, and these minority groups tend to see Mr Assad as their best insurance against chaos. They eye with fear the long borders that divide their country from Iraq and Lebanon and their well-armed militant groups.

All the same it has become clear is that there is a widespread dissatisfaction with a government that has failed to provide jobs and an acceptable standard of life for its citizens. Fear of speaking up is dissipating. Confusion at the top is giving the unrest a chance to grow. There will be more funerals and more crowds today. If there is more bloodshed there, yet more Syrians may decide to come to the street, and their demands may grow.

photo: Hundreds of Syrians march from the Omayyed mosque in the centre of Damascus’ Old City towards Souk Al-Hamadiyeh street on March 25, 2011 chanting “Daraa is Syria” and “We will sacrifice ourselves for Syria,” as protests spread in Syria from the opposition’s southern epicentre of Daraa to Damascus and a town south of the capital, where authorities moved to arrest at least five demonstrators. AFP PHOTO / STR