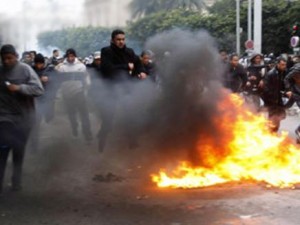 Al-Arabiya TV reported on Wednesday that protesters in the southern Syrian city of Daraa are chanting against Iran and Hezbollah.

Al-Arabiya TV quoted AFP as saying that the death toll in Daraa has risen to 15 ( including an 11 year old girl) since last Friday and hundreds have been injured    in clashes between security forces and protesters .

The violence escalated  in the afternoon as protesters holed up in the city’s Omari Mosque exchanged fire with security forces, while a funeral procession was also attacked Wednesday by Syrian troops.

The country – which is under a 1963 emergency law banning demonstrations – has for the past week seen a string of unprecedented protests demanding that Syrian President Bashar al-Assad step down.