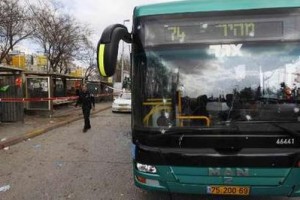 There were no immediate reports of deaths ( see update) in the first serious bombing in Jerusalem in four years, but several people were critically injured, authorities said.

The blast took place in “a very crowded area” with “a lot of civilians and two buses,” said Yonatan Yagadovsky, a spokesman for Israel’s emergency services.

“Three to four are in critical condition. The rest of the casualties are moderately to lightly injured,” he said. The injuries came from both the force of the blast itself and from flying shrapnel, he said.

The terror attack comes after an unusually intense period of hostilities between Israel and the Palestinians. At least 10 Palestinians have been killed since Saturday, including four militants and two children who died in an Israeli strike that appears to have missed its target. 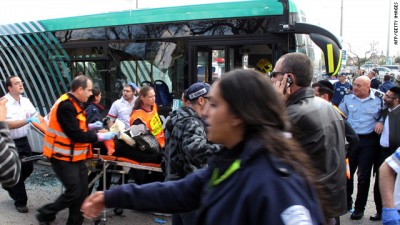 Police found a medium-sized explosive device attached to a phone booth near the site of a blast. It was close to Jerusalem’s central bus station, Israeli medical services said.

All the people injured in the blast were between the bus station and a bus, police spokesman Micky Rosenfeld said.

“Israel and Jerusalem are relatively very safe recently,” Mayor Barkat told CNN. “This is something that happens rarely, and we hope to keep it that way.”

He said he hopes security forces will find the people responsible and “bring them to justice.”

The attack “brings very bad memories to us,” medical services spokesman Yagadovsky said. “It was relatively very quiet,” he said, adding that Israel had not had “this type of terror attack for a very, very long time.”

“It is something that we will have to deal with again.”

Update: State-run Israel Radio says a woman has died from the bomb blast at a Jerusalem bus stop.