Bahrain warns its citizens against travel to Lebanon, update 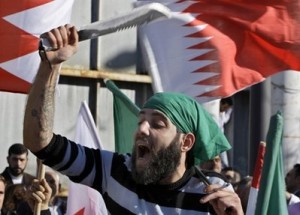 The Kingdom of Bahrain has reportedly warned its citizens against traveling to Lebanon, citing potential threats to their safety.

The travel advisory comes after Bahrain condemned on Sunday Hezbollah’s criticism of its government, describing it as an intervention in the Gulf country’s internal affairs and held the Lebanese government responsible saying the statements would have a negative impact on the Lebanese-Bahraini bilateral ties.

During a televised speech via video link on Saturday evening Hezbollah leader Sayyed Hassan Nasarllah called the events in Bahrain a “special injustice”. Nasrallah asked whether Arab silence about the repression of protests there is due to sectarian prejudice against the Shiite-majority opposition.

He also said Hezbollah is ready to help the protesters

Photo : A Hezbollah and Amal supporter carries a knife as he shouts slogans during a protest in front of the U.N. house in downtown Beirut, Lebanon, Wednesday, March 16, 2011, against the crackdown in Bahrain. Most of the protesters were Lebanese Shiites from Amal and Hezbollah