U.S. Calls on Syria to refrain from violence against protesters 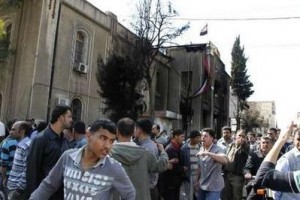 The United States condemned on Monday Syria’s crackdown on anti-government demonstrations over the weekend, accusing the government of using “disproportionate force” against protesters.

“We call on the Syrian government to allow demonstrations to take place peacefully. Those responsible for the violence over the weekend must be held accountable,” said White House spokesman Tommy Vietor.

Reports indicated the Syrian government used “disproportionate force” against civilians, both protesters as well as mourners of those killed in earlier demonstrations, Vietor added.

At least one person was killed and more than 100 wounded Sunday when Syrian security forces fired on protesters who went on the rampage in the southern city of Daraa, rights activists said.

On Saturday security forces arrested dozens of protesters in Daraa, where thousands of people attended the funerals of two of the four victims who died in protests on Friday.

Hundreds of people demonstrated against the Syrian government in the town of Jassem on Monday, activists said, as unrest spread in southern Syria. “They are staging a sit-in the center of the town,” one of the activists said.

Deraa,a city in the Hauran region close to the border with Jordan, has seen the most sizable protests so far. But demonstrations have also taken place in Homs, Damascus and its environs, Der el Zor, the Kurdish city of Qamishli, Banias and Aleppo.AFP

Photo: Syrian people gather outside the main courthouse, which was set on fire by demonstrators demanding freedom and an end to corruption, in the southern Syrian city of Daraa March 21, 2011.