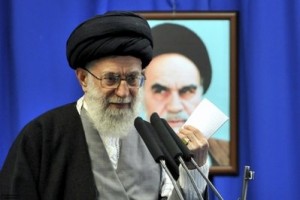 “The US and Western (allies) claim they want to defend the people by carrying out military operations or by entering Libya… You did not come to defend the people, you’ve come after Libyan oil,” Khamenei said in a live broadcast from the holy city of Mashhad.

“Iran utterly condemns the behaviour of the Libyan government against its people, the killings and pressure on people, and the bombing of its cities… but it (also) condemns the military action in Libya,” he said.

Under a UN Security Council resolution, the United States, Britain and France on Saturday launched air strikes on Libyan air defence systems to impose a no-fly zone on the regime of strongman Moamer Kadhafi.

The Security Council passed a resolution on Thursday authorising the use of “all necessary measures” to protect civilians and impose the no-fly zone after Kadhafi’s forces appeared on the verge of crushing the month-long rebellion.

Khamenei said that Islamic republic supports those who have rebelled against Kadhafi, but said the West was seeking a foothold in the north African nation to monitor the uprisings in neighbouring Egypt and Tunisia.

The all-powerful leader, delivering his yearly speech on the Persian new year, also expressed vehement support for “all regional uprisings,” insisting that Iran did not distinguish between their Sunni Muslim or Shiite roots.

Iran “supports all the popular movements which are under the slogan of Islam and (seeking) freedom,” he said, addressing the Shiite-led uprising in the Sunni-ruled kingdom of Bahrain.

“We don’t distinguish between Gaza, Palestine, Tunisia, Libya, Egypt, Bahrain and Yemen. We have supported Palestine for 32 years, and they are not Shiites. It is not an issue of Shiites and Sunnis… It is the protest of a nation against oppression,” Khamenei said.

Tensions have heightened between Manama and Tehran over Iran’s criticism of the Gulf state’s bloody crackdown on Shiite-led pro-democracy protests, with the assistance of a Saudi-led Gulf Cooperation Council force.

Earlier on Monday, Bahrain’s King Hamad said his forces had managed to foil a “foreign plot being prepared over a period of 30, maybe 20 years” to target Gulf countries.

Khamenei said the regional uprisings signalled that a new Islamic movement was forming in the Middle East, and that it would “definitely become victorious.”

“What I firmly announce is that a new movement, with the grace of God, has started in the region… This widespread awakening of nations, which is directed towards Islamic goals, will definitely become victorious,” he said.

The United States and other Western countries have deplored the bloodshed in tiny but strategic Bahrain, which hosts the US Fifth Fleet, but Washington has accused Tehran of undermining peace in the Gulf by trying to advance its agenda in neighbouring states.

Khamenei called the criticism unwarranted, and advised Washington to focus instead on “the Saudi tanks on Bahrain streets.”

He also accused Obama of “lying.”

“The US president has sent a message that he supports (the Iranian people), he claims to be against dictatorship and a supporter of (regional) nations. But he is lying,” he said, pointing out that Obama had supported ousted Egyptian and Tunisian leaders Hosni Mubarak and Zine El Abidine Ben Ali.

Obama had earlier expressed solidarity with Iran’s young people, saying “I am with you,” and criticised the Tehran regime for its “campaign of intimidation and abuse” against its opponents.

But Khamenei said the real “hypocrite” was the US government, a statement welcomed by chants of “Death to America,” and “Death to Obama.”

He accused Washington of trying to simulate an Arab-like uprising in the Islamic republic, saying this was a “doomed and grotesque plan.”

US-Iranian animosity has reached new heights as Tehran pushes forward with what it calls civilian nuclear ambitions despite Western fears these could mask a military goal.

“The series of United States failures in the region, God willing, will continue,” Khamenei said. France24