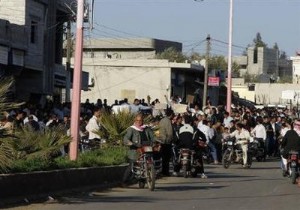 Mundhir Masalmi, 11, died today after suffering tear gas inhalation during a weekend demonstration in the southern Syrian city of Daraa, the Associated Press reports, quoting an activist who asked not to be identified.

That would bring the death toll to at least seven in four days of protests.

Today, riot police armed with batons chased away a small group of demonstrators who defied a bloody crackdown by Syrian security forces in the city of 300,000 near the border with Jordan, the AP reports. The group marched and shouted, “No more fear!” before riot police broke up the demonstration.

An AP reporter in Syria said traces of the weekend protests by thousands were everywhere: burned-out and looted government buildings, a dozen torched vehicles, an office of the ruling Baath Party with its windows knocked out.

Protesters burned an office of the telecommunication company Syriatel, which is owned in part by the president’s cousin.

Earlier post: The southern Syrian city of Daraa remains “tense” today after weekend clashes between protesters and police that left at least one person dead and the Baath Party headquarters ablaze, Al-Jazeera reports.

Activists said it was the fifth death in three days from attacks by police on protesters in the city of 300,000 near the Jordanian border, AFP reports.

In the last assault, police fired live ammunition and tear gas at demonstrators Sunday, killing one and wounding scores, according to witnesses, The New York Times reports.

Syrian authorities have alternated between harsh measures and conciliatory gestures during the popular unrest.

President Bashar al-Assad sent an official delegation to offer condolences to the families of the initial four victims.

Thousands took to the street Sunday to demand the release of all political prisoners, the end to Syria’s five decades of emergency law and trials for those who shot and killed the protesters. AP