Hezbollah’s No. 2 accuses March 14 of sabotage 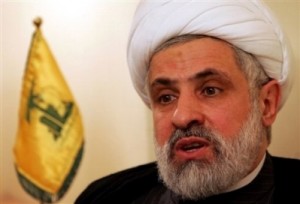 “They want to sabotage to be able to rule…and they want to do so regardless of any new cabinet that will be formed,” Qassem said, according to a statement issued by Hezbollah.

Qassem added that his party will not respond to the speeches given during the March 14 rally last Sunday… “the party has not and will not do so.”

“We are not concerned with what they said and what happened at the even … and this is why we will not respond.”

He said that the March 14 parties “do not respect the law, the Taif Agreement or popular demands .”

“Why? They are only concerned with remaining in power, which causes them to reject any solution. The chaos began with the day of rage” against the appointment of Najib Miqati as prime minister-designate, Qassem said.

Even though Hezbollah lost the parliamentary election in 2009, it insisted on a veto power in the cabinet of caretaker PM Saad Hariri .

Nagib Mikati was appointed in January as the PM designate with the backing of the Hezbollah March 8 alliance and MPs Walid Jumblatt and Mohammad Safadi following the collapse of Hariri’s unity government. March 14 leaders have repeatedly said that intimidation from Hezbollah’s weapons helped secure the parliamentary majority for Mikati’s nomination.

More than one million Lebanese of all faiths… Christians. Druze , Muslim Shiites and Sunnis demanded that Hezbollah be disarmed as they rallied last Sunday to mark the sixth anniversary the Cedar Revolution, the uprising which inspired the recent revolts in the Middle East, International news agencies reported