Gaddafi tells Benghazi: It’s over, We are coming tonight 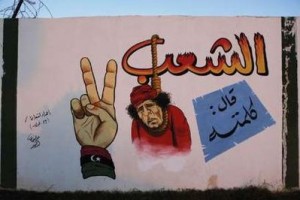 Muammar Gaddafi told Libyan rebels on Thursday his armed forces were coming to their capital Benghazi tonight and would not show any mercy to fighters who resisted them.

In a radio address, he told Benghazi residents that soldiers would search every house in the city and people who had no arms had no reason to fear.

“It’s over … We are coming tonight,” he said. “You will come out from inside. Prepare yourselves from tonight. We will find you in your closets.”

The speech was broadcast on radio and television shortly after a defence ministry statement warned that any foreign military action would trigger counter-attacks and endanger all air and sea traffic in the Mediterranean region.

In Benghazi, live footage on Al Jazeera television showed hundreds of defiant Libyan rebels gathered in the central square waving the tricolour flag of the monarchy era in a rally after Gaddafi’s speech was broadcast.

In the speech, the Libyan leader denounced the rebels and said: “We will show no mercy and no pity to them.”

He also told his troops not to pursue any rebels who drop their guns and flee when government forces reach the city.

It was not clear whether any government attack would actually follow the short speech.

Tripoli has been trying to put psychological pressure on the rebel capital by warning residents to avoid rebel installations and reporting pro-Gaddafi rallies there that residents say never took place.

Rebels have scoffed at the reports, saying they proved the Libyan army was not strong enough to attack.

Gaddafi’s speech came only hours before the United Nations Security Council was due to vote on a resolution on imposing a no-fly zone over Libya.

Photo: A caricature of Muammar Gaddafi is painted on the wall of the garrison headquarters in the rebel stronghold of Benghazi March 11, 2011.