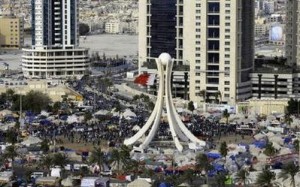 Bahraini forces,backed by helicopters,fired tear gas in a crackdown on protesters on Wednesday,clearing hundreds from a camp that had become the symbol of an uprising by the islands Shia Muslim majority.

Hospital sources said three policemen and two protesters were killed in the assault that began a day after Bahrain declared martial law to quell worsening sectarian unrest that has sucked in troops from fellow Sunni-ruled neighbour Saudi Arabia.

But a defiant youth movement,which had been leading the Bahraini protests,called for a mass demonstration from all Manama suburbs towards Budaya Street in the north of the capital.Earlier a Bahraini defence official warned Bahrainis not to gather in public, saying it was for public safety.

An MP from the largest Shia Muslim opposition group denounced the government assault as a declaration of war on the Shia community.This is war of annihilation.This does not happen even in wars and this is not acceptable, Abdel Jalil Khalil said. TOI