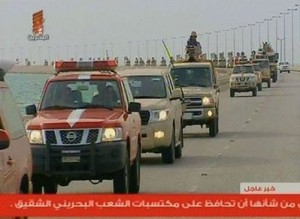 Bahrain’s king declared a three-month state of emergency Tuesday in an effort to quell a month-old uprising as rival groups of protesters and gangs set up more checkpoints around the capital.

The move by King Hamed ibn Isa Khalifa appeared to amount to a declaration of martial law the day after hundreds of troops and police from Saudi Arabia and the United Arab Emirates poured into Bahrain with the support of the government after worsening violence paralyzed Manama, the capital, in recent days.

An announcement by Bahrain’s official news agency said the king had declared the state of emergency “in light of the latest security escalations” and had delegated to the commander in chief of Bahrain’s military “the necessary measures in order to implement the decree.”

Few military units, either from Saudi Arabia or Bahrain, were visible around Manama on Tuesday, but the Associated Press reported that a Saudi sergeant had been shot and killed by a protester, according to Saudi security official. The report could not be immediately confirmed.

Bahrain has been shaken by weeks of protests as the nation’s Shiite Muslim majority has taken to the streets to complain of unfair treatment at the hands of the Sunni-dominated government.

In neighborhoods populated largely by Sunnis, young men carrying sticks and metal rods, many with their faces covered, blocked roads and examined cars. At several checkpoints, the gangs stood next to Interior Ministry security forces and said they were guarding their neighborhoods against Shiites.

“We are defending our homes from the Shia people,” said one young man carrying a wooden club, who declined to give his name. He and several associates had blocked a road in the suburb of Riffa, a largely Sunni neighborhood where several palaces used by the ruling family are located.

Nearby, a Ministry of Interior police officer sat inside his truck near the checkpoint.

Near Pearl roundabout, the traffic circle occupied by Shiite demonstrators since last month, protesters had established their own barricades. Most cars were being allowed to pass. Several young men said they were prepared to block police or military units from entering the area, though no security forces were visible on the streets.

Photo: An image grab taken from Bahrain TV shows a contingent of Gulf troops arriving in Bahrain across a causeway from Saudi Arabia. Bahrain’s King Hamad has proclaimed a three-month state of emergency, a day after a Saudi-led military force entered the tiny island nation to help put down Shiite-led protests