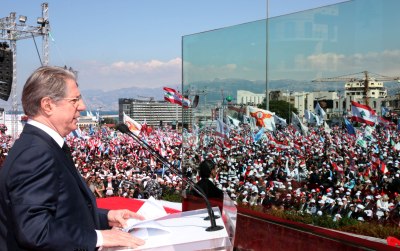 “All that Hezbollah cares about now is the Special Tribunal for Lebanon (STL) … It forgot Israel. It forgot about Kfar Shouba and the Shebaa Farms.” In reference to the Lebanese territories that are still occupied by Israel.

“First they carried arms to defend Lebanon against Israel, then they carried them to form a state, intimidate you, carry out a coup and impose a government that contradicts Lebanon’s higher interests,” he added during his address to the rally at Beirut’s Martyrs Square.

“They want to transform Lebanon from a state of law to a state that confronts all international resolutions.”

“We are not addressing the issue of non-state arms because we want to be enemies with any party in particular. We are addressing this issue to save Lebanon and build the state.”

Instead, he said that March 14 aims to “abort the coup against the state, the regime, and the democratic way.”

“We call for the truth to be revealed through the STL. We are not here to accuse anyone or sow division.”