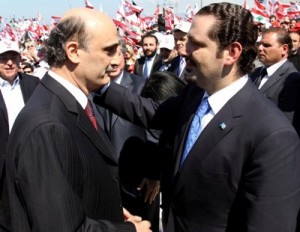 “Do not rest until the statelet is extinct and the state is established,” he said, in reference to Hezbollah’s state within a state and its non-state weapons.

He stressed that “we only want the Lebanese state to govern,” and accused Iran of exporting its Islamic Revolution to Lebanon through Hezbollah.

“We did not delegate anyone to defend us,” he said, adding, “We do not accept the replacement of the Lebanese army.” This was a direct response to MP Michel Aoun’s statement on Saturday in which he addressed March 14 ‘s campaign against the non-state ( illegal ) arms and the Sunday rally :” It is better if they go to sleep and not bother themselves about the arms because no one can in the world help them disarm the resistance , not the UN , nor the United States nor Israel and if the arms have been used internally it is because they ( March 14 ) deserve it .”

Geagea also voiced support for the Special Tribunal for Lebanon (STL), saying it “has suffered violent and ugly attacks even before it began to show results, in a desperate attempt to stop its work.”

“We will not accept the overthrow of justice.” He stressed