Trouble at 2 Japanese Nuclear plants due to qauake, Tsunami 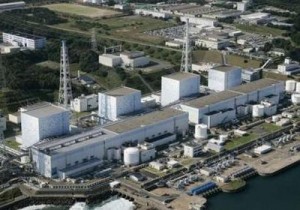 Reactors at two Japanese power plants can no longer cool radioactive substances, a major electric company said Saturday, according to a news agency report that added that atomic material may have leaked out of one of the plants.

Citing the Tokyo Electric Power Co., Japan’s Kyodo News Agency said that radioactive substances may have seeped out of the Fukushima Daiichi nuclear reactors, about 160 miles (260 kilometers) north of Tokyo.

Potentially dangerous problems in cooling radioactive material appear to have cropped up there, as well as at another of the Tokyo Electric Power Company’s nuclear plants, Ichiro Fujisaki, Japan’s ambassador to the United States, confirmed to CNN. Both plants are named Fukushima Daiichi and both have nuclear reactors, but they are separate facilities.

Kyodo reported Saturday that the power company alerted authorities that the cooling system at three of the four units of one Fukushima Daini plant in northeastern Japan’s Fukushima prefecture had failed.

Temperatures of that plant’s coolant water was hotter than 100 degrees Celsius (212 degrees Fahrenheit), the news agency said, an indication that the cooling system wasn’t working.

Authorities subsequently ordered residents within 3 kilometers of that facility to evacuate as “a precaution,” Fujisaki said. That plant was also added to the Japanese nuclear agency’s emergency list, along with the other Fukushima Daiichi plant.

The news agency also reported Saturday that Japan’s nuclear safety agency ordered the power company to release valves in that plant, as well as the other Fukushima Daiichi plant’s “No. 1” reactor.

Tom Cochran, a senior scientist with the National Resource Defense Council, explained that this was likely done to release growing pressure inside both atomic plants. High temperatures had caused the water, meant to cool the radioactive material, to boil and thus produce excess steam.

This comes amid Kyodo’s reports, citing the same Japanese agency, that radiation levels were 1,000 times above normal in the the control room of the “No. 1” reactor at one of the facilities.

These and other issues caused by the 8.9-magnitude quake prompted authorities to order an evacuation of people within 2 to 3 kilometers (1.2 to 1.8 miles) of the plant, a move Edano called “precautionary.” Early Saturday morning, Prime Minister Naoto Kan said that the evacuation order had been extended to affect those within 10 kilometers of the reactor.

Kan spoke to reporters shortly before flying to the quake-ravaged region with nuclear safety authorities — including going over the Fukushima Daiichi facility — according to Fujisaki.

The evacuations notwithstanding, the nuclear safety agency asserted Saturday that the radiation at the plants did not pose an immediate threat to nearby residents’ health, the Kyodo report said.

These developments come a day after the quake ravaged the Asian nation, shutting down power to more than 1.2 million people and stoking fears of a crisis at the nation’s atomic plants.

Most of the concern initially had centered around the first Fukushima Daiichi plant, which Chief Cabinet Secretary Yukio Edano told reporters on Friday “remains at a high temperature” because it “cannot cool down.”

That plant and three others were shut down after the quake hit around 2:46 p.m. Friday local time, prompting authorities in Tokyo to declare a state of atomic power emergency.

Three of the Fukushima Daiichi reactor’s six units shut down because of the earthquake, while operations at the other three were out due to “regular inspection,” the Tokyo Electric Power Co. said in a news release Saturday.

Fire broke out at a third facility, the Onagawa plan. But crews put it out, according to the International Atomic Energy Agency.

Many hours later, shortly before 4 a.m. Saturday, a 6.6-magnitude aftershock struck near Nagano Prefecture on the west coast of the Japanese island of Honshu. Afterward, Kyodo reported that the nearby Kashiwazaki-Kariwa nuclear reactor continued to operate as normal. That quake was one of at least seven measuring magnitude 5.2 or stronger after the main quake, the U.S. Geological Survey said.

The trouble at one of the Fukushima Daiichi plants happened after its once operating reactors had been successfully shut down, Edano said.

Cham Dallas, a professor of disaster management at the University of Georgia, said that it wouldn’t be surprising if reactors get “both thermally hot and radioactively hot” after the reactors were shut down.

“When they shut down reactors, it takes a long time for them to go down,” Dallas said. “It does not necessarily mean radioactive material got out of the reactor.”

The International Atomic Energy Agency said Friday on its website that the quake and tsunami knocked out the reactor’s off-site power source, which is used to cool down the radioactive material inside. Then, the tsunami waves disabled the backup source — diesel generators — and authorities were working to get these operating.

Janie Eudy told CNN that her 52-year-old husband, Joe, was working at the plant and was injured by falling and shattering glass when the quake struck. As he and others were planning to evacuate, at their managers’ orders, the tsunami waves struck and washed buildings from the nearby town past the plant.

“To me, it sounded like hell on earth,” she said, adding her husband — a native of Pineville, Louisiana — ultimately escaped.

Eighty employees of General Electric Hitachi Nuclear Energy, including Eudy, who were at the plant are all safe, company spokesman Michael Tetuan said. He added that the firm is devising plans to evacuate those workers, who were subcontractors at the plant.

The IAEA, the international nuclear organization, said Friday that its officials are “in full response mode,” as they worked with Japanese authorities and monitor the situation.

“We’re really deeply involved in trying to do as much as we can on behalf of the Japanese and on behalf of U.S. citizens,” she said.

The problems at the Fukushima Daiichi reactor are just one of many affecting power stations around the country, especially in northeast Japan.

All these shutdowns had left more than 1.2 million people without power as of Saturday morning, according to the electric company.

James Acton, a physicist who examined the Kashiwazaki-Kariwa plant after a 2007 earthquake, told CNN that releasing the valves from the two power plants might only spew a relatively small amount of radioactive material into the atmosphere. A greater concern would happen if — after what Cochran estimated would occur if temperatures topped 540 degrees Celsius (1,000 Fahrenheit) — the fuel rods inside the reactors melted down.

“The big problem is if it can’t cool and the (reactors’) core starts to melt — then you have the possibility of a greater release of radioactivity into the environment,” Acton said. If that happens, “there’s a possibility of cancer in the long term — that’s the main hazard here.”

Photo: The Fukushima nuclear plant in Fukushima prefecture in northeastern Japan is pictured in a 2008 file photo. Japan has told the U.N. nuclear wathchdog that a heightened state of alert has been declared at the Fukushima Daiichi nuclear power plant after Friday’s major earthquake. The International Atomic Energy Agency (IAEA) said it had also been informed that the plant had been shut down and that no release of radiation had been detected.