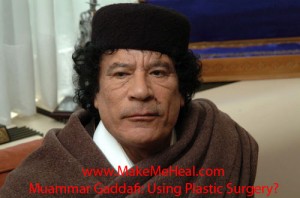 Muammar al-Gaddafi the strongman of Libya who has been orchestrating attacks on rebels from Ras Lanuf to Benghazi underwent cosmetic surgery in 1995 in order to avoid appearing old to his countrymen.

According to a prominent Brazilian cosmetic surgeon he operated on Gaddafi 16 years ago in order to give him a more youthful look.

Liacyr Ribeiro, 70, said that the Libyan leader insisted on an imperceptible operation.

Ribero operated from two clinics in Rio de Janeiro and is said to have performed cosmetic surgery on Italian Prime Minister Silvio Berlusconi as well.

He told the Brazilian weekly Epoca : “I wanted to leave Gaddafi’s face looking very smooth in 1995.

“He [Gaddafi] said he had been in power for several years and that he didn’t want young people to see him as old.

“Although well bred and intelligent, Gaddafi to me seemed introverted, timid and cold.”

The former president of the Brazilian society of plastic surgery and a student of famed plastic surgeon Ives Pitanguy said that he had decided to reveal Gaddafi’s secret after so many years “to contribute to understanding this historic figure around whom there is much speculation but little information.”

The surgeon said he had been contacted in 1994 by then Libyan health minister Mohamed Zaid while attending a conference on plastic surgery in Tripoli.

After Ribeiro’s lecture on his specialty breast surgery, Zaid said that he wanted to introduce him to someone very dear to him.

The doctor thought it was a woman who wanted breast surgery.

He was wrong and the minister told him when they arrived at Gaddafi’s bunker : “You are going to examine our leader.”

Ribeiro returned to Libya in 1995 to operate on Gaddafi along with his colleague Fabio Nacach, a specialist in hair implants.

The procedure involved fat being removed from Gaddafi’s belly and injected into the wrinkles in his cheeks.

His eyelids were then made to look better and a scar on the right side of his forehead was covered up.

Ribeiro said that even though he did not bill Gaddafi the Libyan handed him an envelope stuffed with dollars and French francs.

Who knows if everything goes wrong in Libya Gaddafi may be back for more surgery but this time asking to be made to look like someone nobody would ever guess was him.